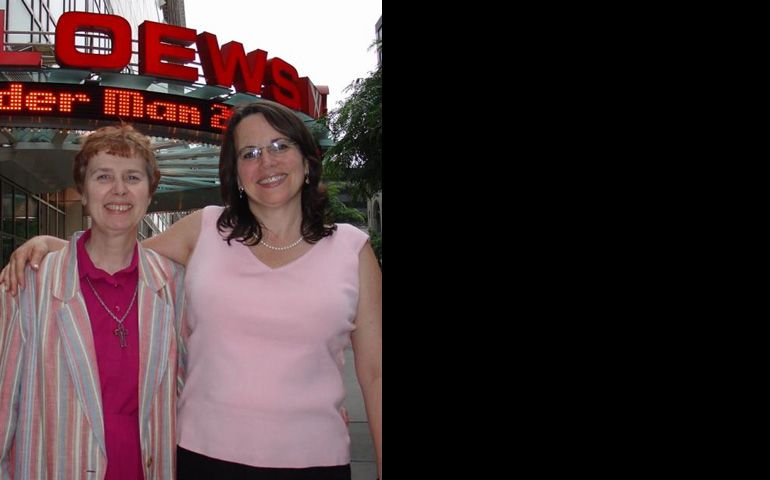 Sr. Jeannine Gramick, left, and Barbara Rick at New Fest Screening of "In Good Conscience" in New York City in 2005. (Courtesy of Out of The Blue Films, Inc.)

A decade ago, "In Good Conscience: Sister Jeannine Gramick's Journey of Faith" premiered at Lincoln Center's Independents Night in New York City. The film chronicles Gramick's journey from quiet nun to groundbreaking advocate and minister to the Catholic gay and lesbian community, and it explores her response to her silencing by then-Cardinal Joseph Ratzinger. Directed by Emmy-winning documentarian Barbara Rick and shot by legendary filmmaker Albert Maysles, "In Good Conscience" went on to play many film festivals across the globe and to win scores of awards.

On Saturday, the film returns to the festival circuit as part of Believe Out Loud's Level Ground film festival, which runs Nov. 14-16 in New York City. (Tickets here.)

As part of this 10-year anniversary, Rick and her documentary nonprofit, Out of the Blue Films, is producing an updated version of the film. GSR sat down with Rick to discuss the film and what viewers can expect from the 10th anniversary edition.

GSR: For those who haven't seen "In Good Conscience," would you say what it was about Sr. Jeannine that compelled you to make a film about her?

Rick: I'm a lifelong journalist, and I was writing the news at one of the networks on a Saturday back in the spring of 2000. Part of the job is looking at newspapers and online to see what is going on in the world. I stumbled across something in The New York Times about an American nun who was refusing to be silent over her ministry to gay and lesbian Catholics. I remember just sitting up as straight as can be in my chair. I was like, "Oh my God, she is really doing something powerful."

This is a woman who is doing something revolutionary by refusing to be silenced by the patriarchal hierarchy of the Vatican. That just resonated very deeply with me: a woman standing up without fear (or in spite of fear) and saying, "I refuse to collaborate on my own oppression." That just hit such a deep chord in me.