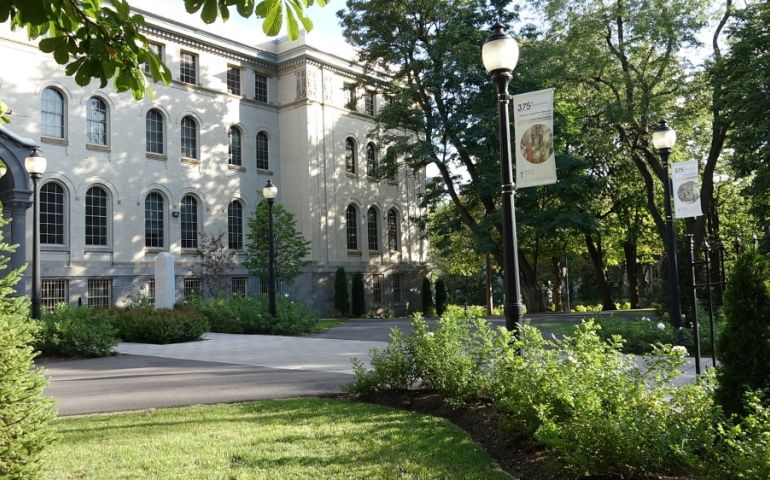 The motherhouse of Congrégation de Notre-Dame in Montreal is working to lessen its carbon footprint. (Dana Wachter)

They didn't want to give up the same coffee they had been drinking for decades.

Switching to a new machine meant fewer options for coffee or hot water, and the new brand takes about 13 seconds to pour instead of only two or three. It costs more, too.

But standing in solidarity with the poor farmers who grew the coffee beans by paying them a fair wage was something the sisters of Congrégation de Notre-Dame could get behind.

Under the inspiration of their foundress, Marguerite Bourgeoys, and buoyed by Pope Francis' encyclical "Laudato Si', on Care for Our Common Home," the sisters decided to undertake 12 actions aimed at lessening their environmental footprint. They launched a green committee in 2015 and have since introduced fair-trade purchasing, decided on a new environmentally friendly heating and air system, and, among other things, continued to educate themselves and others about green initiatives.

"Scientists have been alerting us for years and years and years about [all] that was happening to the earth, the water, the air, and all of that, calling us to connect the dots, really," said Sr. Maura McGrath, leader of the community's green committee. "As people of faith, [we are] realizing that this is a moral and ethical and a spiritual issue."

Needing to start somewhere, the congregation hired a Montreal-based environmental nonprofit, Equiterre, in 2015 to estimate the carbon footprint of their 80,000-square-foot motherhouse, which was built as an education facility in 1914 and served as a school for generations before becoming the sisters' headquarters within the last 15 years.

Together, Equiterre and the sisters created a list of actions and started implementing tangible impact, but change has not come easily.

"I think, unconsciously, we're all resisting," McGrath said. "Nobody really likes change. I think that it's always a challenge to move from the words that we say to the actions."

McGrath equates the pain of the Earth to the pain of those living on it, suffering in many ways. With natural disasters, floods, fires and famines, she said the sisters must do their part to mitigate environmental degradation.

EarthBeat Weekly: Five years after Laudato Si', how far have we come?