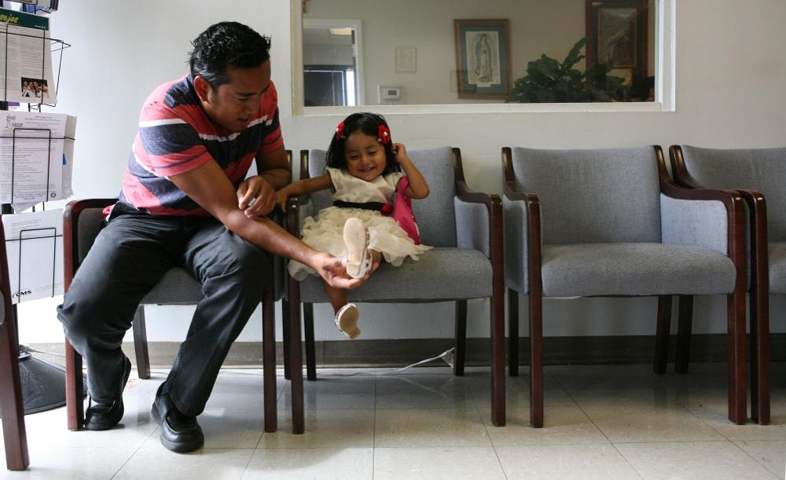 Fabian Martinez of Chiapas, Mexico, entertains his daughter, Nicole Martinez, 2, while they wait for his wife, Maresa Gutierrez who is consulting with an immigration attorney at Guadalupan Multicultural Services' La Casita in Birmingham, Alabama. (GSR/Nuri Vallbona)

Elsa Solis Morales had lived in Birmingham, Alabama, for four years when her abusive relationship drove the courts to take away her three children. Though they were returned once Morales separated from her husband, the 35-year-old mother needed to provide clothing, furnish their new living arrangements, and undergo therapy — overwhelming tasks given her lack of English and difficulty finding a job.

As she sat alone in La Casita's waiting room, Morales seemed eager to share her experiences, details pouring out of her with little prompt. Wiping away tears, she said she hoped her story would empower women who also found themselves in desperate conditions.

"In these situations, it's very difficult to know how to look for help or where to begin," she told me on this, her first visit to the center staffed by Catholic sisters supporting the burgeoning Hispanic scene in the Birmingham diocese. A friend had recommended she look into La Casita, and Morales didn't have a Plan B.

Within the hour, she spoke with a sister about obtaining financial relief, scheduled a session with a psychologist, and met with a notary to discuss her rights and how to fully liberate herself from her abusive relationship.

The Guadalupan Missionary Sisters of the Holy Spirit -- whose motherhouse is located in Mexico City -- formally began their La Casita ministry in the diocese in 2002. By 2015 they were finalists for Catholic Extension's Lumen Christi Award, granted to an individual or group whose mission best demonstrates how faith can transform lives.