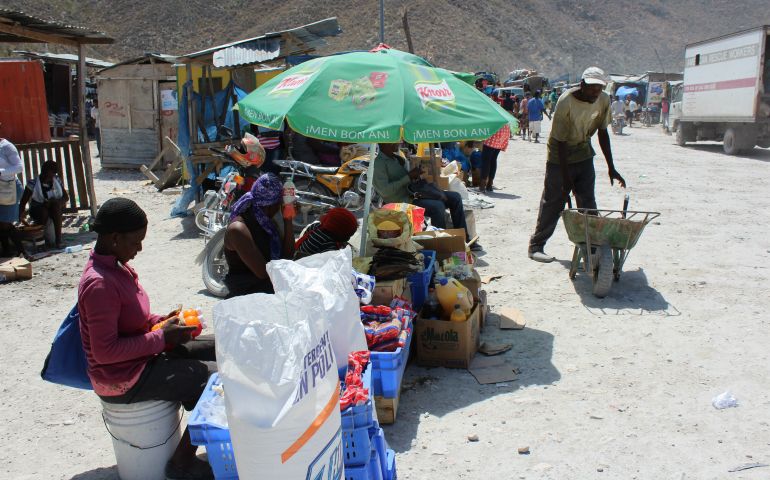 Scene at the border between Haiti and the Dominican Republic near Malpasse, Haiti. (GSR photo/Chris Herlinger)

She was surrounded by more than a dozen young men who were either Haitian or Dominicans of Haitian descent. They had just been deported from the neighboring Dominican Republic, a Spanish-speaking country with a long and uneasy relationship with Creole-speaking Haiti, which is now, because of what critics call racism against Haitians and the vicissitudes of internal Dominican politics, deporting hundreds each day.

The men were stuck at the border because they did not have the money to take a bus to rejoin their families in Haiti, many of whom live in the capital of Port-au-Prince, about 40 miles from Malpasse. Jesuit Refugee Service (JRS) welcomes the men and tries to help them locate families in Haiti. The organization's mission is to help those who have no other means to leave the border area.

D'Souza, who is from India, joined JRS on a recent Thursday, as did her fellow sister from the Society of the Daughters of the Heart of Mary, Sr. Maria Maglene Pinto of Brazil. Pinto had been to the border before and knew its disorder, uncertainty and dread.

But D'Souza was startled, amazed and not a little incredulous that she and others working with a team from JRS were the only ones offering any kind of support to the young men.

Justice | At the Haitian-Dominican border, a ministry to help the displaced who 'fight to survive'

Cardinal turns on the lights and raises ire of Italian politician