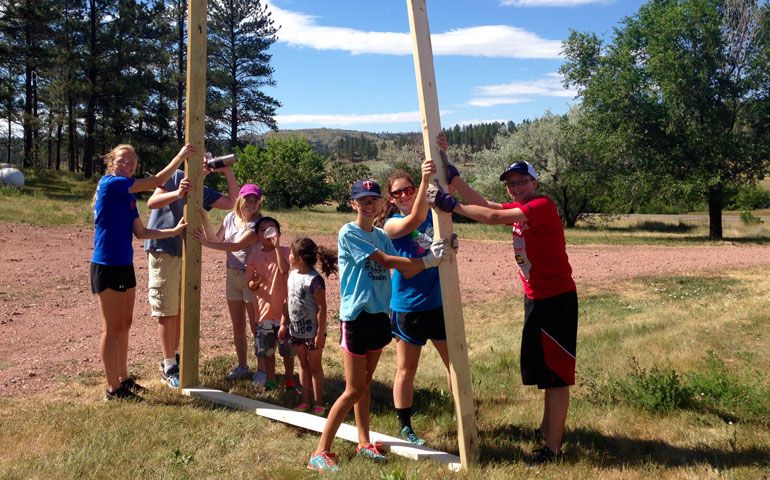 Members of a Catholic HEART Workcamp team build a shed in Lame Deer, Mont., on the Northern Cheyenne Reservation on July 13. The project was completed at the home of Francis and Vonda Limpy, who are Northern Cheyenne tribal elders. (Courtesy of Annie Nassis)

Orlando, Fla. — This summer, some 12,500 middle-class Catholic teenagers spent a week in poor neighborhoods across America, scraping and painting houses, cleaning yards, building wheelchair ramps and the like for the poor, the elderly and the handicapped.

"My group built a wheelchair ramp for a man who had trouble getting up and down the stairs," said Charlie Baker, a 16-year-old who made the trip from Knoxville, Tenn., to the Northern Cheyenne Indian Reservation near Ashland, Mont. "Then we took down the back porch and built him another because it was in bad shape."

Baker is a junior at Knoxville Catholic High School, and an outspoken admirer of Catholic HEART Workcamp, an Orlando company that has organized 48 camps from Florida to Minnesota, New Jersey to Nevada.

"What I like best about work camp is making a personal connection with the people we're there to help," said Baker, who has gone to camps in different parts of the country each of the past three years.

HEART (Helping Everyone Attain Repairs Today) was formed in 1993 by youth ministers Steve and Lisa Walker. Earlier, the couple had taken a group of teens from their parish, St. Margaret Mary in Winter Park, Fla., to a work camp sponsored by a Protestant group.

"It was an amazing experience, but the kids actually asked why we didn't have anything like this that was Catholic," Lisa Walker said.

Work camps were a special opportunity to teach faith. "Service to others is at the heart of our faith," Lisa Walker said. "If we aren't doing it, we are missing what we are called to do."

Revisiting wedding readings, for my first Father's Day as a dad