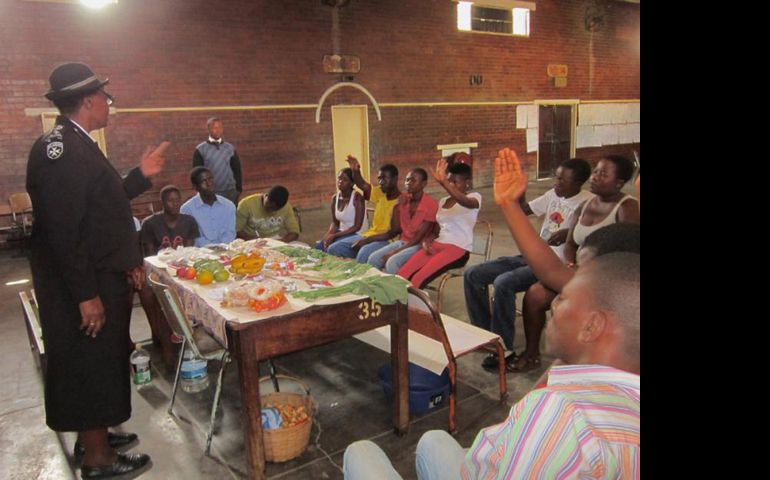 Gogo Wazara, a St. John Brigade commissioner, teaches her students what food people should eat and what food they can in the bush and roadsides to give their patients the balanced nutrition they need. She illustrates this with pictures or real samples. (Jill Day)

Harare, Zimbabwe — Children here are often orphaned by AIDS. Perhaps the worst part is caring for their dying parents when they don't know what to do.

In a country with one of the highest rates of people living with HIV/AIDS, children too often assume roles as caregivers and heads of households. Helping those children learn practical skills to attend stricken parents and grandparents became a mission for Dominican Sr. Dominica Siegel, a longtime educator in Zimbabwe.

Working as an administrator at St. John Ambulance, an international organization that trains people in first aid, Siegel set out to design a course, known as home-based care for child-headed households. And Siegel has been determinedly raising funds for it since 2007. To date, more than 5,000 young people have been trained in and around the capital of Harare and in the two major cities of Bulawayo and Mutare.

"In April, 500 students who head their households received certificates in home-based care," Siegel said. "Their delight is overwhelming -- for most of them, it is the first time they have had any recognition, and here they are, surrounded by their peers, receiving a certificate that tells the world that they can help family members who are ill die with dignity."

I've seen the effects firsthand as a volunteer with St. John Ambulance for four years.