'How could I not feel blessed?' 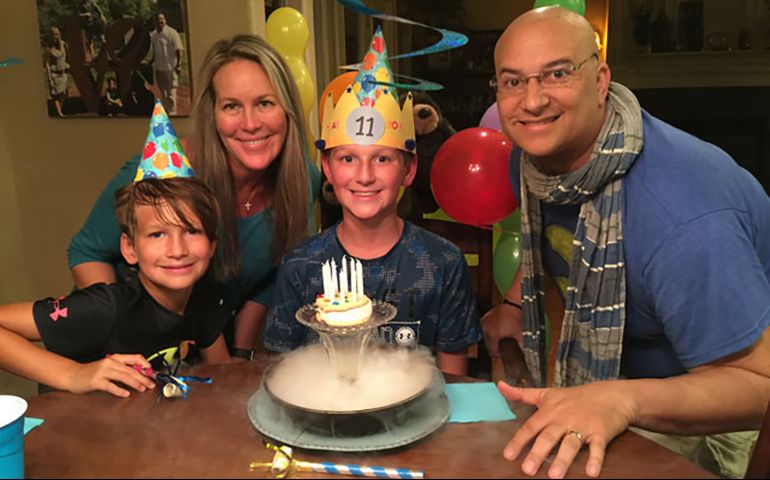 Benn Banks with his wife, Kristianne, and their sons, Tristan, left, and Sebastian, center

There was a time when Benn Banks' voice entered a room before he did -- booming, boisterous, and, more often than not, brimming with self-deprecating humor. Paired with, in his own words, a "strong physical presence" that once served him well as a middle linebacker for the Air Force Academy, Banks could never have imagined that, two decades later, he'd be diagnosed with adenoid cystic carcinoma, an extremely rare form of cancer known as an "orphan" disease because so little is known about it.

In 2014, Banks launched a blog titled "Don't Walk Away from a Good Fight"  to update family and friends on his health.

"Cancer will take many things from me, one of which will be my larynx during a full laryngectomy and left side radical neck revision ... but I am going to live, and I am going to fight for a long life with my family," he wrote.

Before losing his voice -- one of his "most treasured assets" -- during the first of four surgeries in two years, Banks posted a photograph to Facebook of himself in a pink bunny suit outside the MD Anderson Cancer Center in Houston. Grinning, he holds a sign that reads, "Cancer Can Take My Voice But It Can't Take Who I Am!"

When a mutual friend's comment on the photograph popped up on my Facebook feed, I felt compelled to send him a message wishing him well, as we'd been students together at Redmond High School in Seattle. We were both raised Catholic, too, though I didn't realize this then, perhaps because we attended different parishes.

People | 'How could I not feel blessed?'