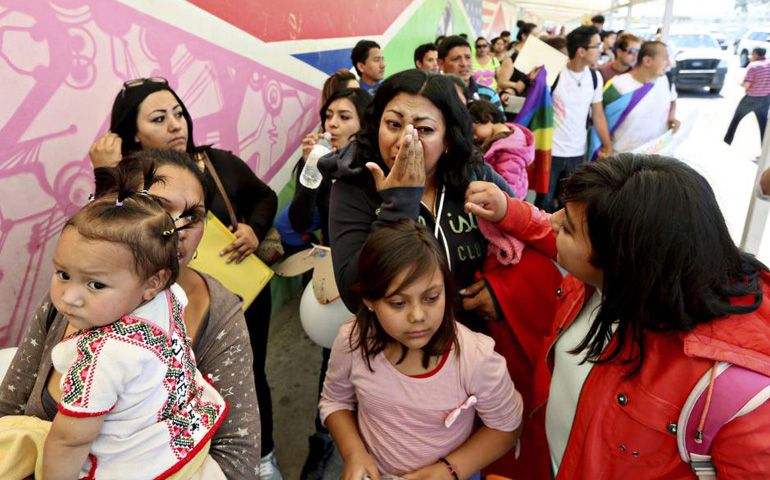 Cecilia Garcia wipes away a tear as she stands in line with deportees during a protest in Tijuana, Mexico, in March 2014. (CNS/Reuters/Sandy Huffaker)

Women and children fleeing horrific violence in Central America remain caught in the wheels of the American immigration system, advocates say, despite a court order that the government take their cases seriously.

"They feel besieged," said Yvonne Dilling, a lay missioner with the Maryknoll Fathers and Brothers. Dilling visits people detained at the federal government's family detention center in Karnes City, Texas. "Some are in and out in a month or so, others are just held there, and no one seems to be moving their case forward at all."

More than 1,000 families remain in detention, mainly in Karnes and at Dilley, Texas, where advocates say they are traumatized and depressed as their cases languish in the immigration court system.

The number of families in detention has remained about the same despite the government closing the detention center in Artesia, N.M. Dilley, which opened in December, is able to hold close to 500 people but will ultimately be able to house 2,400. Karnes is doubling in size to house 1,200. Both are run by private contractors.

Dilling said the detainees flee violence in their home countries of El Salvador, Guatemala and Honduras from areas where the government has broken down and is unable to protect its citizens only to be detained in the United States, where they're seeking asylum. The fact that they are in detention means they've already met with an asylum officer who has determined they have a "credible fear" of persecution back home -- meaning their asylum case has merit -- or they would have already been deported.

But here they sit, trying to raise children. Dilley is southwest of San Antonio and Karnes is southeast of the city -- both in remote, isolated areas. While Karnes has grass and trees, Dilley is described by those who have been there as desolate, with a landscape of dirt and gravel.

With election over, Catholics in Bolivia hope to bridge country's religious divisions