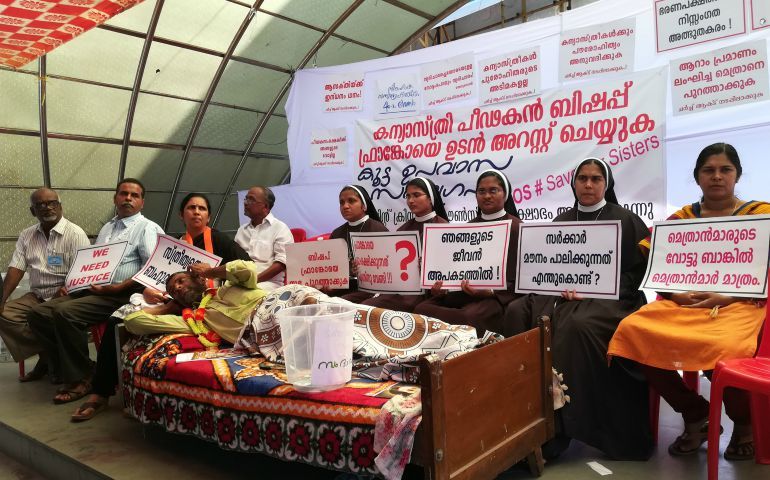 Stephen Mathew, on cot, is on an indefinite hunger strike while nuns from the Missionaries of Jesus stage an indefinite sit-in near the High Court of Kochi, commercial hub of southwestern Indian state of Kerala. They are demanding the arrest of Bishop Franco Mulakkal of Jalandhar, who is accused of raping another sister in their congregation. (Saji Thomas)

Kochi, India — Five Catholic nuns in the southern Indian state of Kerala are holding an indefinite sit-in demanding the arrest of a bishop accused of repeatedly raping another sister.

"We are literally forced to launch this public protest after the church leadership in India and the Vatican ignored our demand for justice," Sister Josephine, one of the protesting nuns, told Global Sisters Report on Sept. 11, the fourth day of their sit-in at a busy intersection near the Kerala High Court in Kochi, the state's commercial hub.

The sisters are members of the Missionaries of Jesus, a diocesan congregation based in Jalandhar, a northern Indian diocese. The accuser, whose name cannot be revealed under Indian law, is not among those protesting under the banner of Joint Christian Council, a laity movement.

The sister said Bishop Franco Mulakkal of Jalandhar, the congregation's patron, sexually abused her 13 times at a Kerala convent between 2014 and 2016. She reported the assault to Kerala police June 28.

'Vos Estis' expires in one year. What works and what changes are needed in version 2.0?