An insider and an outsider 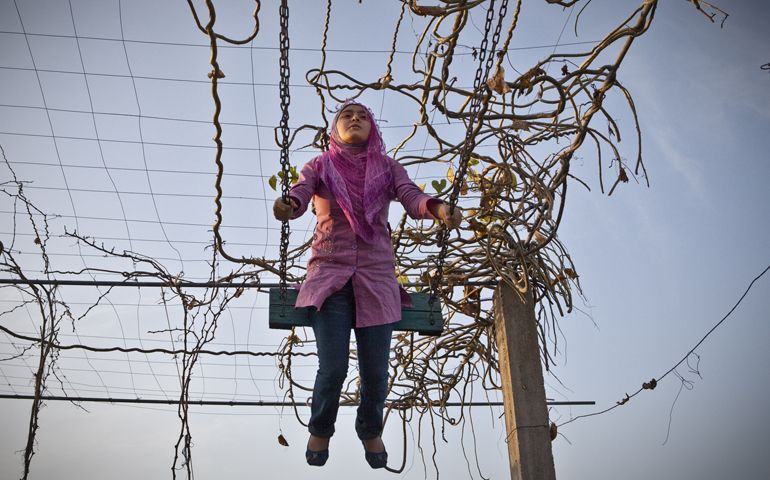 Untitled, from the series “Women of Gaza,” 2009, by Tanya Habjouqa

The soccer net and the basketball hoop have seen better days. The gym floor is covered with marks from countless shoes, and ghostly banners, impersonating shades, hang from the windows. And then there are three women, clad in long coats (jilbab) with headscarves, raising their arms above their heads. Their feet face the viewer, while they turn their torsos, like synchronized swimmers, to the side, obstructing the view of their faces. They are working out.

Getting access to* the photo required some negotiation, said Tanya Habjouqa, an East Jerusalem-based photojournalist and educator.

"They said to me, 'We're going to be mocked or pitied by the West,' " Habjouqa said. " 'Look at those poor women and how oppressed they are -- how they cover even while working out.' " But the fact was, the women's neighborhood had been decimated in an Israeli bombardment, and the only place they could go to exercise was the high school building.

The photograph, from Habjouqa's "Women of Gaza" series, is one of several of her works on view in "She Who Tells a Story: Women Photographers from Iran and the Arab World" at Washington's National Museum of Women in the Arts (through July 31). The show, which the Museum of Fine Arts, Boston, organized and debuted, subsequently traveled to Stanford University's Cantor Arts Center and to Pittsburgh's Carnegie Museum of Art.

Culture | An insider and an outsider