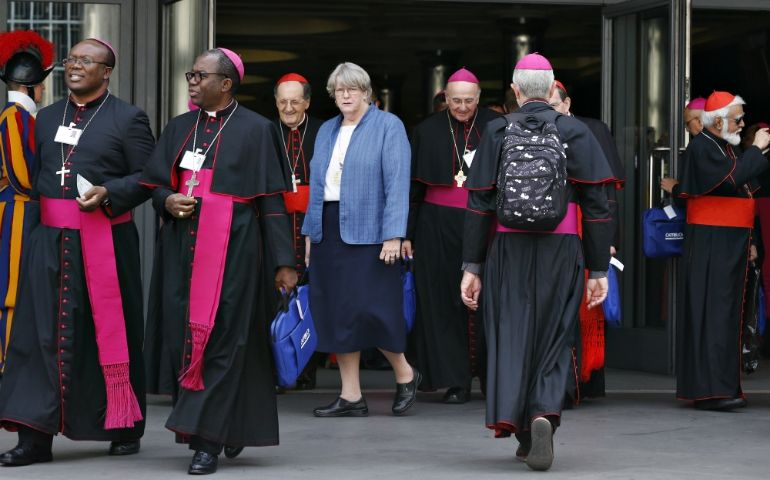 Sr. Sally Hodgdon, superior general of the Sisters of St. Joseph of Chambéry, leaves a session of the Synod of Bishops on young people, the faith and vocational discernment Oct. 16 at the Vatican. (CNS / Paul Haring)

Rome — The vice president of the umbrella organization representing the world's Catholic women religious said the group will continue to press for women religious to be granted a vote at the Vatican's Synod of Bishops.

Sr. Sally Hodgdon said there are two nonordained religious brothers serving as full voting members of the ongoing synod on young people while the seven sisters taking part are doing so in nonvoting roles.

"That should change," she told Global Sisters Report.

Hodgdon, the No. 2 official for the Rome-based International Union of Superiors General (UISG) for the last five years and one of the seven women religious taking part in the Oct. 3-28 gathering, said that under the Catholic Church's theology, brothers and sisters have analogous roles as nonordained, professed members of religious orders.

"These two brothers are allowed to vote," said Hodgdon, who also leads the Sisters of St. Joseph of Chambéry. "They are equal to me because they are both superiors general of congregations. I'm a superior general of a congregation."

"In theory — not even in theory, in reality — we are equal," she said in an Oct. 16 interview. "If the pope allowed the two brothers to vote, it's logical that I would be able to vote."