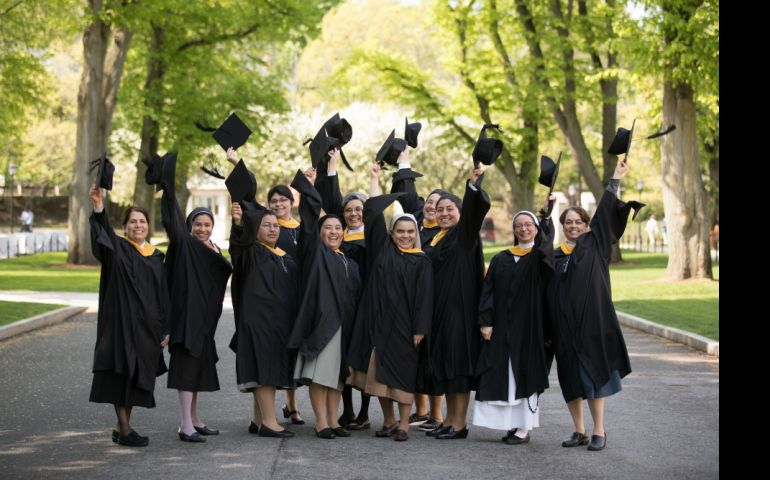 The sisters who participated in the first U.S.-Latin American Sisters Exchange Program ended their five years with a bachelor's or master's degree from Boston College. They graduated May 20. (Courtesy of Rich Kalonick)

The Latin American sisters who arrived to the United States as part of an exchange program in 2014 heard the same mantra repeatedly: You will only be here for five years. From day one, they had to plan ahead in their new ministries.

Now, after they served 10 underresourced dioceses for those five years, the 36 sisters have graduated from the U.S.-Latin American Sisters Exchange Program and are heading back to their home countries. But now they are largely fluent in English and have bachelor's or master's degrees from Boston College, as well as leadership and pastoral experience.

"It truly is the definition of an exchange because the sisters that come to the U.S. are building these wonderful ministries, but they're also training leaders to grow the ministries after they leave so that it becomes sustainable," said Erika Cedrone, senior director of mission at Catholic Extension, the papal mission society that funds the exchange program, launched in 2014.

"Then they return home with all the academics they learned, the experiences they had in the U.S., and grow their home congregations in the Global South," a selling point to their mother superiors, she said.

The sisters from Mexico, Honduras, Guatemala, Puerto Rico, El Salvador, Colombia and Venezuela were in their 30s and 40s with a few exceptions, including one who was 70 when she arrived. They were chosen largely because of the leadership potential their superiors wanted to tap and develop to "help them become better leaders within their congregations and eventually better mother superiors," Cedrone said.

"It's all about potential. If she only has an eighth-grade or high school diploma but she has the potential to do amazing things, that's the sister we want."