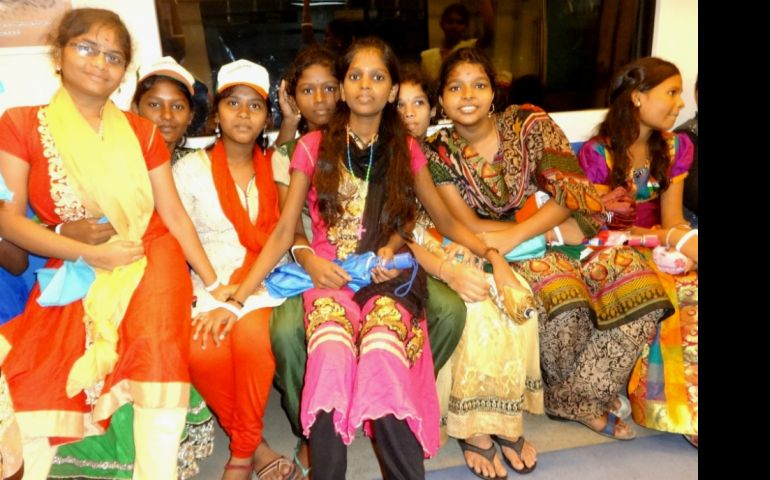 A group of girls living in Marialaya go on an outing in Chennai, India, in 2017. The girls at Marialaya (House of Mary) are the care of the Daughters of Mary Help of Christians, also known as the Salesian Sisters of Don Bosco. (Provided photo)

Chennai, India — When Glory Karthik was 8, a social worker suggested that her parents, who had no money to feed or educate her, send her from the slums to a home for girls managed by Catholic nuns in Chennai, a southern Indian city.

"I felt happy seeing the sisters and girls and expressed my desire to stay there," Karthik said.

She returned home after spending 10 years in Marialaya (House of Mary) under the care of the Daughters of Mary Help of Christians, also known as the Salesian Sisters of Don Bosco. Now 31, the mother of four school-going children makes a living by stitching clothes while her husband works in a transport company.

"I'm happy and content now, thanks to the sisters. They prepared me for a decent and dignified life. Otherwise, I would have continued my miserable life in the slum," Karthik told Global Sisters Report when she came to visit the nuns at Marialaya.

Marialaya has nurtured more than 2,000 girls like Karthik between the ages of 6 and 18 since its inception in 1990. Currently, more than 100 girls live in Marialaya, a four-story building in George Town, one of the oldest parts of Chennai, capital of Tamil Nadu state.

People | At Marialaya, girls from India's slums find home, nurture and a future

For even a smidgen of virtue within us, we owe thanks to God