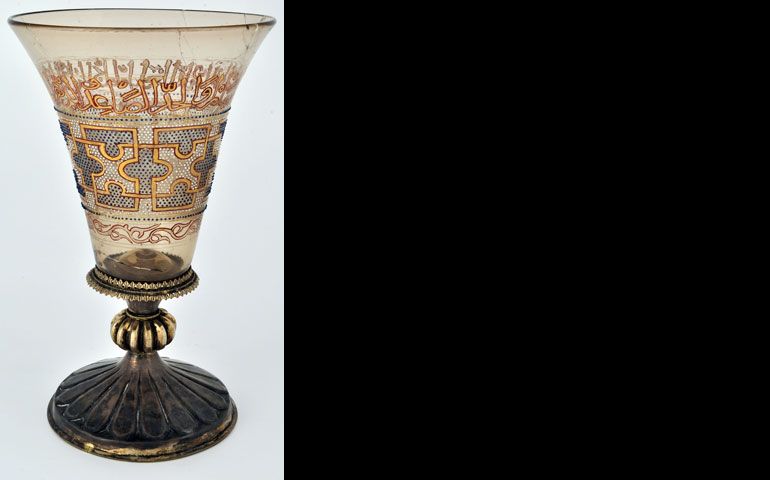 The Goblet of Charlemagne, with gold and silver enamel from 12th-century Syria, mounted on a gilded silver base from France in the 13th-14th centuries, in the collection of the Musée des Beaux-Arts de Chartres (Courtesy of the Metropolitan Museum of Art)

"Let me tell you something that we Israelis have against Moses," Golda Meir, Israel's prime minister from 1969 to 1974, famously complained. "He took us 40 years through the desert in order to bring us to the one spot in the Middle East that has no oil."

The Holy Land, despite its lack of oil reserves, continues today to attract countless pilgrims, both faithful and otherwise, drawn to centuries of stories layered upon its architecture and landscapes. And 1,000 years before oil meant power, Jerusalem was an important stop on well-trodden trade routes and drew Christian, Jewish and Muslim religious pilgrims from near and far.

What made the tiny land of Israel, née Canaan, such an alluring focus of both real and imagined travels -- of archaeology, history and mythology? For Muhammad with his midnight dream journey that was later interpreted to have been to Jerusalem, for Christians who imagined going on pilgrimage to the Holy Land as they walked through corresponding mazes in the basements of their castles, for Jews whose prayers almost perpetually yearned for the holy city, Jerusalem had its own sort of gravitational pull.

Answering the question of what made Jerusalem so central to so many different peoples is one of the declared goals of the Metropolitan Museum of Art's exhibition "Jerusalem 1000-1400: Every People Under Heaven" (through Jan. 8). The year 1000, however, is rather late to begin pondering the contours of what made the Holy Land so holy.

Just down the stairs and around a few corners from the Met's exhibition, several fascinating glass pilgrimage jars, dating to the sixth and seventh centuries, bear Jewish and Christian symbols. A workshop in the south of the Holy Land marketed the souvenirs, perhaps for holy water or sand, to both Jews and Christians, which may have meant that rare interfaith exchanges could have occurred standing in the same shopping line.

Rewinding further in history, Moses wanted nothing more than to enter Israel. But he had to settle for a tease from afar, atop Mount Nebo, in punishment for his sin of striking rather than talking to a rock, which was to quench the Israelites' thirst. Israel, it turns out, is often elusive and just beyond reach. The Bible often describes its flowing milk and honey, as if Israel's streets are paved with gold. But in Numbers 13:32, the spies charge that the land "devours its inhabitants," and Leviticus 18:28 declares that the Holy Land will respond to being defiled by ominously "vomiting" its inhabitants out.