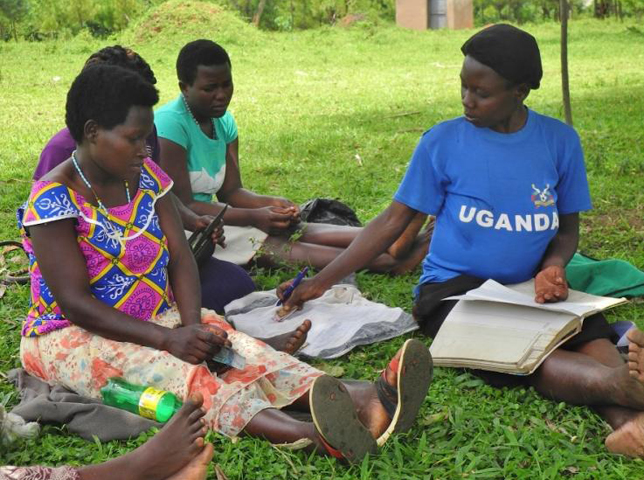 Women gather to collect the week's savings and update the ledger under the mango tree for their saving and internal lending community, or SILC. (Melanie Lidman)

This bank doesn't have a soaring marble lobby or uniformed tellers speaking in hushed tones. This bank is a faded blanket spread beneath a mango tree where a circle of women, hardworking passion fruit farmers, sit with their feet tucked under their colorful skirts, tossing crumpled Ugandan shillings into the center. The accounting system is a well-worn ledger filled with painstakingly neat handwriting and few deposits over $2. Mabel Marunga, the treasurer, flattens each note and carefully enters it into the ledger, a separate page for each woman in the circle.

These women are part of a community-organized savings group, a fast-growing initiative in international development, which, in the words of one aid worker, creates funds out of thin air.

Dr. Muhammad Yunus, who won the Nobel Peace Prize in 2006, is credited with pioneering the idea of microfinance in his native Bangladesh when he started giving loans of $27 to bamboo furniture makers in 1976. When poverty is so extreme, even paying for raw materials, like ingredients for selling street food or bamboo to make furniture, requires borrowing money. And when people are forced to borrow from predatory lenders, it is nearly impossible to make a profit to grow the business or move up the economic ladder.

According to Catholic Relief Services, most of the people in Uganda, 86 percent of the population, are subsistence farmers, struggling to grow enough food to survive.

The microfinance theory holds that amounts as small as $25 can provide enough momentum to push someone from precarious subsistence to generating a small income. According to global consulting firm Infosys, today there are 75 million people using loans from microfinance institutions, totaling more than $38 billion.

In Marunga's savings group, small loans are used to purchase raw materials or goods to launch business initiatives, like making pancakes to sell at a local market, paying a laborer to help with planting a field, or buying chickens to produce eggs to sell.