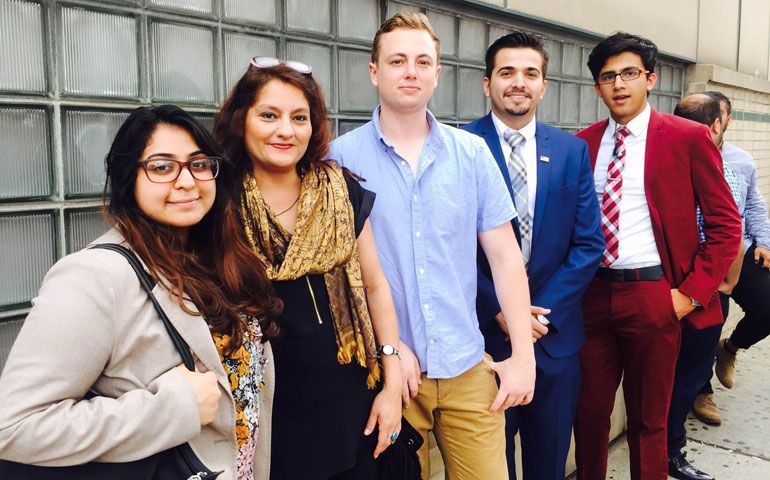 Hate crimes against Muslim Americans have increased to a level unseen since the aftermath of the Sept. 11 attacks in 2001. According to a study by the Center for the Study of Hate and Extremism at California State University, San Bernardino, hate crimes in 2015 against American Muslims were up 78 percent since the previous year.

Though it is often difficult to avoid the rhetoric surrounding Islam, some Muslim students have found an unexpected haven in Catholic universities and colleges.

Manhattan College engineering student Haris Ali, 20, is no stranger to the Catholic faith. He has attended Catholic school almost his entire life, so when it came time to choose a college, the Catholic values of Manhattan College weighed heavily in his decision. Although the school in Riverdale, N.Y., was not Ali's first choice -- his exact response was "absolutely not" -- his parents encouraged him to go there because of its reputation, scholarships and the "Catholic community, family lifestyle."

Ali is the current president of the Muslim Student Association at his college, and has found the Lasallian school to be a welcoming environment for himself and other Muslim students.

"I think they come here because they feel as if their beliefs might be more well-protected in a Catholic school, because at the core of this school is Lasallian Catholic principles," he said. "Maybe they look for that brotherhood or sisterhood when they come, hoping not to be judged -- whereas they might be in a non-Catholic university, non-Christian university."

Ali knows judgment and discrimination firsthand. He hasn't had any trouble at Manhattan College or any Catholic school, but he had difficulties during his enrollment in public school from fifth to ninth grade.

"I did face heavy scrutiny when I was in public school," he said. "I was bullied and I was beaten up and I was attacked as being a 'terrorist.' " When asked why he thought he didn't have a similar experience at Catholic schools, he attributed it to a shared sense of community and principles.

Mehnaz Afridi, the Muslim Student Association adviser at Manhattan College and director of the school's Holocaust, Genocide and Interfaith Education Center, agrees. As a Muslim, she said Manhattan College has been a great place to work. "It really is one of those places you're accepted as equal," said Afridi.

"In the larger world, of course, you know being a Muslim and teaching Islam is very difficult," she said. "But I think here you're given a lot more comfort, a lot more support and you know if anything happens, people are always very concerned. So I think that it's a very welcoming community."

Amal Al-Rasheed, 20, a political science student at the University of Dayton in Ohio and the acting president of its Muslim Student Association, has also felt a similar sense of community.

We need a national paid family and medical leave program. Here's what Congress can do