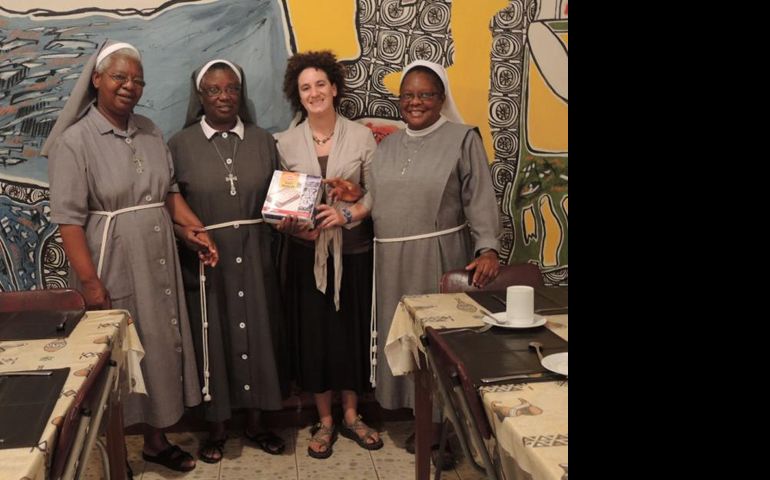 From left, Franciscans Srs. Euphrasia Chanda and Gertrude Chanda, Melanie Lidman, and Sr. Emmanuella Chilangwa with a box of matzah in the Kulandu Study Center Dining Room at the Kulandu Centre. The Chanda sisters share a last name but are not related and share administrative duties at the center. (Courtesy of Kulandu Centre)

"I brought some matzah," I told the sisters at the Kalundu Study Centre in Lusaka, Zambia, during my reporting trip this month. "I thought I could share it and explain a little bit about how Jews celebrate Passover."

"Oh, for the Seder!" exclaimed Sr. Euphrasia Chanda, a Franciscan sister and the director of the formator's course at Kalundu. "We celebrate the Seder every year," she said. In fact, seeing as you are Jewish, she told me, perhaps you have some recommendations for a recipe for haroset, a mixture made of fruit that is meant to represent the mortar the Israelites used during their slavery. Last year, she said, it turned out too lumpy.

As a Jewish reporter for Global Sisters Report, I am often touched and humbled by the ways our traditions intertwine. But I've never been as surprised as I was to learn that sisters have been celebrating a Passover Seder at the Kalundu center since 1974, longer than I've been alive.

Nineteenth Sunday in Ordinary Time: Faith is a verb