'One full-time job should be enough,' speaker tells Nuns on the Bus 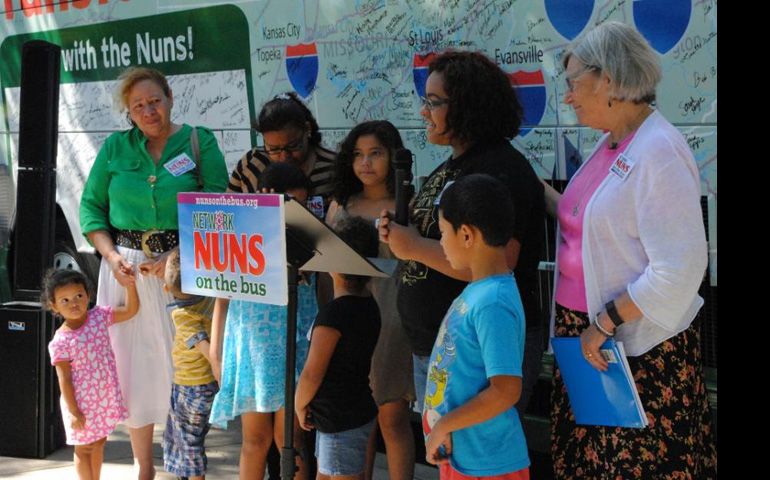 Katherine Meza, second from right, tells the crowd gathered in front of St. Anthony Church about how she and her five younger siblings are under the care of their grandmother, standing left, in green, after their parents were deported to Honduras in May. Social Service Sr. Simone Campbell, right, offers comfort during the emotional story. (GSR photo / Dawn Cherie Araujo)

Kansas City, Mo. — Homemade granola and a bilingual greeting welcomed the Nuns on the Bus on their second stop in a 13-city tour of the U.S. centered on bridging divides and transforming the nation's political discourse and direction.

After hearing of economic and racial injustices Thursday in St. Louis, the seven women religious on the bus stopped outside St. Anthony Parish in north Kansas City on Friday, Sept. 11, where a crowd approaching 100 people shouted "Welcome, sisters!" in unison but in their native languages.

St. Anthony pastor Fr. Paul Turner told the crowd -- in English and Spanish -- that the church was built in the 1920s largely by Italian immigrant families.

"We've been a home for immigrant families throughout our history and still are today," he said.

The plight of immigrants to the United States played a central theme in the Kansas City stop.

People | 'One full-time job should be enough,' speaker tells Nuns on the Bus

Can Catholics and evangelicals sway politics as the 'religious left'?