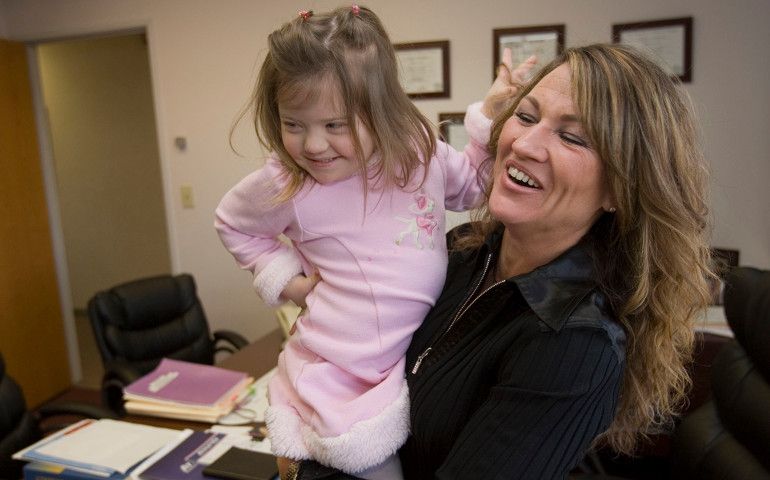 When Lynn Cassidy was pregnant with her first child, her doctor tested the proteins in her blood to determine if her unborn child might have Down syndrome. Since she hadn't even asked for the test, Lynn was shocked when she learned the baby might have the extra chromosome that characterizes the syndrome.

The doctor suggested abortion as an option, which Lynn and her husband, Scott, never considered, because of their Catholic, pro-life beliefs. The test results turned out to be a false positive: Today, McKenna Cassidy is a sophomore at the University of Notre Dame and does not have Down syndrome.

Her younger sister, however, does.

Lynn was 47 when she became pregnant with Ave. This time she consented to the testing to help prepare her teenage children for a sibling who might have special needs. Once again, abortion was repeatedly mentioned, not just because of the Down syndrome diagnosis but because of Lynn's and Scott's ages. Again, they declined.

"We said we were 'all in,' " said Scott, who is CEO of a hospital in Phoenix. "Whatever our situation was, we were going to love and embrace the outcome. … Now it's hard to imagine our lives without her. On all levels, her joining the family has made everything more family-centric and more faith-centric."

But not everyone agrees on the value of the lives of differently abled children.

Last summer, a news report highlighted that in Iceland prenatal testing combined with abortion has resulted in only one or two babies born each year with Down syndrome. Expectant mothers are encouraged to have prenatal testing, with 80-85 percent agreeing to the test and nearly 100 percent of those with a positive diagnosis choosing to have an abortion, CBS News reported.

Because the U.S. government does not track statistics on abortions of children with genetic abnormalities, accurate data is not available, although one statistical analysis estimated that abortion after prenatal testing has decreased the population of people with Down syndrome in the United States by about 30 percent since 1974. Yet, because medical advances have increased their lifespan, four times more people now live with Down Syndrome in the U.S. than in 1950, another study found.

Report: Iceland population of people with Down syndrome 'disappearing'