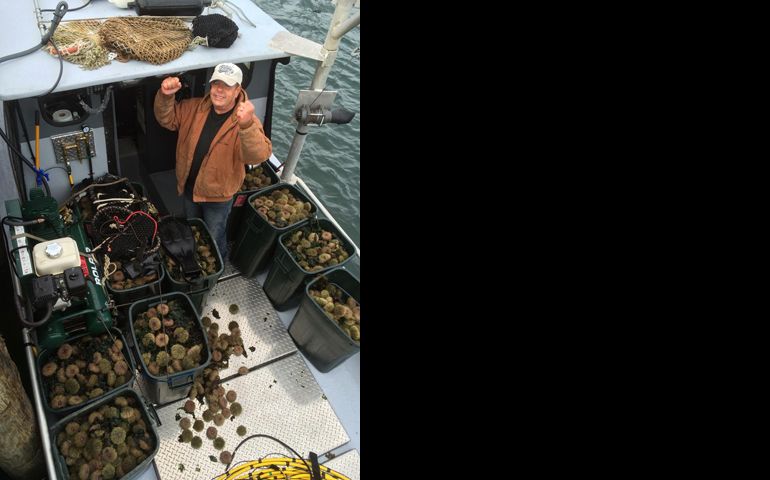 Diver Dan Morris-Young in his other office, with the day's catch of sea urchins (Courtesy of Mike Morris)

A few nights ago, my husband, Dan, called and asked me to bring something immediately to him at the commercial dock at Cap Sante Marina, here in Anacortes, Wash., where we live. Being a dutiful and appreciative fishwife, I jumped to it.

Many of you may know Dan Morris-Young as the veteran Catholic journalist and editor that he is, and enjoy his current contributions to NCR's Field Hospital blog. What only some of you know is that all these years Dan has brought you the news -- as well as his very funny and often poignant humor columns as Aunt Hilda and then Uncle Dan -- he has lived a double life.

Since 1988, Dan has owned and operated Young Ocean Life, an exotic seafood harvesting and exporting company, under which he, his sons, and a tough assortment of men (and the very rare woman — I have only heard about one) dive in the waters around the San Juan Islands for sea cucumbers and sea urchins.

Before you hit Google, a sea cucumber is not a vegetable. They are critters, like a big slug, and are a delicacy in China. More Americans know about sea urchins, or uni, as they are called in Japanese sushi restaurants.

So, I hustled down to "T" dock with the crane key. At the end of their long dive day -- summer days in Washington state start early and end late, thus so do divers' workdays -- Dan was tired, wet, stinky, his face a deeper shade of brown than it had been when I kissed him goodbye at 6:30 a.m. And he was smiling. A good sign of a good harvest.