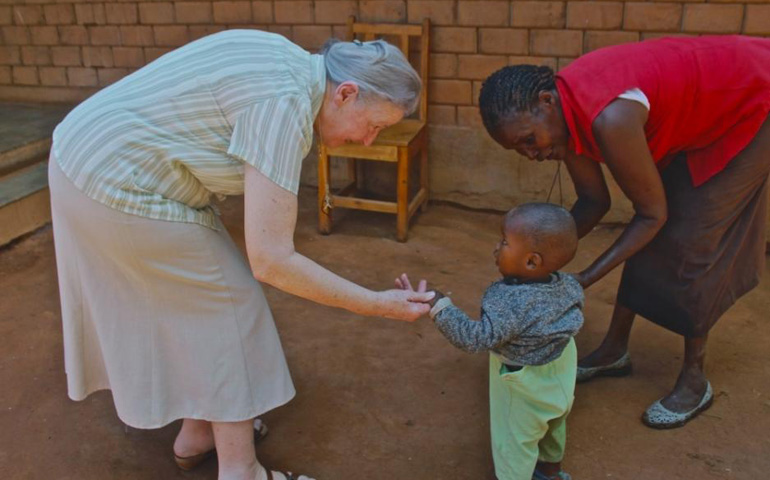 Sr. Mary Owens greets one of the latest arrivals to Nyumbani Village, a planned community outside of Nairobi, Kenya, which she helped develop to care for people affected by HIV/AIDS and their surviving relatives. (Jo Piazza)

Today, Global Sisters Report launches a new blog, When Nuns Rule, by Jo Piazza, author of When Nuns Rule the World. Piazza is reporting for a new edition of the book that will cover the work of sisters in Africa. As she proceeds, she is sharing her work with GSR's community for your input and enjoyment.

Sr. Mary Owens doesn't take no for an answer.

Don't get me wrong. She is a lovely woman, pleasant as can be. But it took only 15 minutes with her on one December morning to understand how she has become such a force in advocating on behalf of HIV orphans in Kenya.

That week, I was staying in The Tribe, a luxurious hotel on the outskirts of Nairobi, which I had no business staying in at all except for the fact that it was owned by a dear friend who thought it adorable that I was writing a book about Catholic sisters and wanted to help me out. My hotel stay came with a driver, Julius Mwangi, who dressed in all black -- fine black pants and a black turtleneck. I constantly wondered how Julius managed to keep his clothing so impeccable, without a trace of dirt or sweat, both of which I was covered in by sunrise. Julius drove a white Range Rover as pristine as he, which we took to meet Owens in at 7 a.m. sharp.

I knew we would be traveling outside of the city. But I wasn't sure how far. Julius had no idea what he was getting himself into. I'm still not sure he would have agreed to it if he had. Still, Owens was able to convince him to do just about anything. She carries that air of authority.