Postville faith leaders, immigrants look back on 10 years since raid 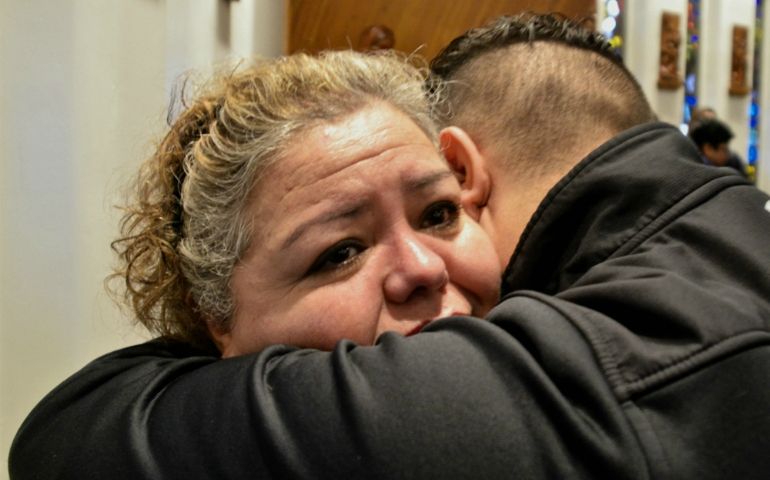 Consuelo Lopez gets a hug from her son, Pedro Lopez Vega, on May 11, 2018, at the interfaith prayer service to commemorate the immigration raid in Postville, Iowa, in 2008. Lopez was among those arrested and deported, but was able to get a visa and return to the United States about a year later. (GSR photo/Dan Stockman)

Postville, Iowa — Sr. Mary McCauley remembers getting a call at 10:03 a.m. on May 12, 2008, telling her that local police and federal immigration agents with military-style weapons and riot gear were at a nearby meat-processing plant. They would arrest 400 men, women and teenagers in what was then the largest single workplace immigration raid in the U.S., disrupting hundreds of lives and changing the town of Postville, Iowa.

The raid had begun just minutes before. McCauley, a Sister of Charity of the Blessed Virgin Mary and pastoral administrator of St. Bridget Catholic Church and two other nearby parishes, rushed to the Agriprocessors kosher meat processing plant to look for people she knew. But workers were being loaded onto buses behind the plant and couldn't be seen. Families were separated, with spouses and children not knowing where their loved ones had been taken or if they would ever see them again.

McCauley returned to the church where already dozens of people were milling around. She and others who arrived to help quickly realized that people feared being arrested if they went home. "We said anyone who's afraid to go home can come to St. Bridget's," she said. "That night we had over 400 people in the church."

On Friday, May 11, 2018, more than 300 people packed St. Bridget, this time to mark the 10th anniversary of the raid and to dedicate themselves to enacting change so similar raids do not happen again.