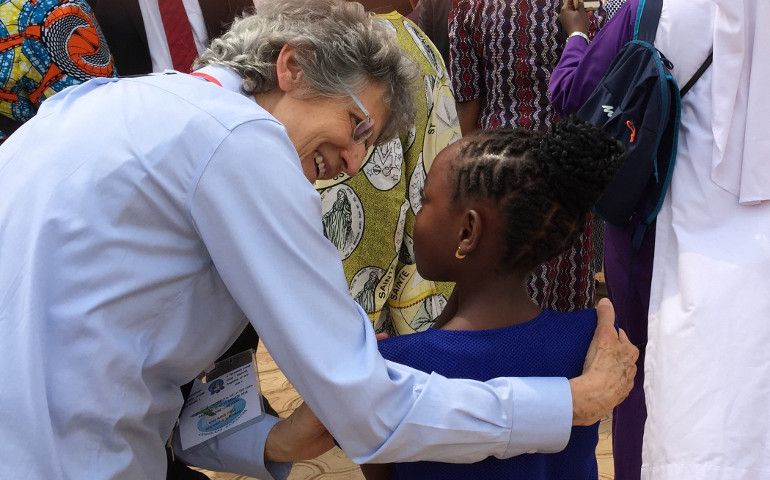 Sr. Marie-Paul Ross talks to a young girl at the Confederation of Major Superiors of Africa and Madagascar symposium in January in Yaounde, Cameroon. (GSR photo / Joyce Meyer)

I had never heard about sexologists until I heard Sr. Marie-Paul Ross of the Missionary Sisters of the Immaculate Conception speak in Yaounde, Cameroon, in January.

Ross travels to many countries to give workshops to laity and women and men religious. She was in Cameroon at the invitation of the president of the Confederation of Major Superiors of Africa and Madagascar (COMSAM) for the group's January symposium. She noted in a talk she gave there that formation programs usually focus on poverty and obedience and have little education on sexuality for the vow of celibate chastity.

Four hundred religious attended the symposium. After listening to Ross, I just had to interview her (with the help of a translator, as Ross speaks Spanish and French). I found her life amazing and courageous.

GSR: Sister, I am very curious about your history and how you became a sexologist. But first, tell me about your vocation.

Ross: I entered the convent in Rimouski, Quebec, as a 17-year-old aspirant high school student and finished high school there. Thirty of us entered together, but only four persevered.

I wanted to be a missionary, but my apostolate began working as a house manager for our infirmary. I eventually took three years of nurses' training and was sent to Peru and Bolivia at different times. Through these years, I became a health promoter in small villages. Of course, I learned Spanish — not formally, but on the job.

When I was in Peru in 1983-84, I was asked to teach an intercongregational formation program for 200 novices. I realized the need for these young women to understand their vow of chastity, so I included sexuality education, too. This went on for about 10 years. Then, in 1994, someone — I never knew who — wrote to Rome about me.

You mean about your teaching sexuality to the novices?

Yes. I was called "the nun from Canada who is speaking clearly and openly about sexuality."

| Q & A with Sr. Marie-Paul Ross, providing an education on sexuality