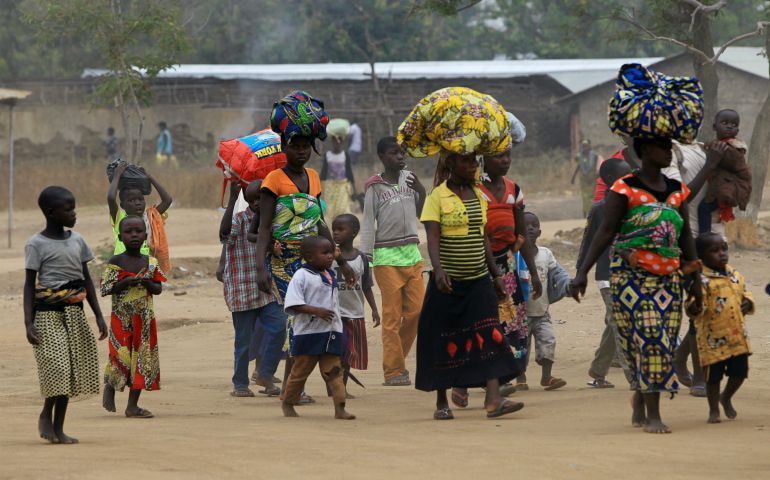 Editor's note: More than 65 million people had been displaced from their homes because of factors such as war, threats from gangs, natural disasters, and lack of economic opportunities at the end of 2016, the highest number of displaced since the aftermath of World War II. Of those, the United Nations considered 22.5 million to be refugees: people forced to leave their countries because of persecution, war, or violence.

Over the next several weeks, Global Sisters Report will bring a sharper focus to the plight of refugees through a special series, Seeking Refuge, which will follow the journeys refugees make: living in camps, seeking asylum, experiencing resettlement and integration, and those who are deported to a country they may only vaguely remember or that may still be dangerous.

Though not every refugee follows this exact pattern, these stages in the journey are emblematic for many — and at every stage, Catholic women religious are doing what they can to help.

An anguished world is on the move.

Syrian refugees fleeing a brutal war reinvent their lives in Jordan, most in cities and towns, while thousands of others dwell in camps that are quickly becoming permanent communities.

The same is true in the crowded settlements in Uganda, where refugees escaping the agonies of war-torn South Sudan continue to seek refuge.

Thousands of Venezuelans cross the border daily into Colombia, fleeing economic and political upheaval; some 200,000 registered as undocumented migrants, though the Colombian government estimates there may be more than a half-million.

In Europe — the destination for many fleeing the Middle East and Africa — the continent is divided by internal debates about how to respond to the flow of people. After an uprising in refugee detention center last month, the German government vowed to get tough on deporting unsuccessful asylum seekers.

By contrast, Catholic sisters in France advocate for the most vulnerable refugees, including single women facing persecution and other dangers in their home countries. Sisters aid refugees in "port of entry" countries like Italy and Greece.

Along the U.S.-Mexico border, sisters assist asylum-seekers and those deported from the United States. And amid rising anti-immigrant sentiment in the U.S., Catholic women religious across the nation help refugees, join other faith leaders to speak out against family separation and take public positions to counter fear and anger.

Refugees, migration a front-burner topic throughout 2016