Seeking Refuge: Jordan takes in masses of Syrians but prefers they don't stay

Part 2 of the Global Sisters Report special series on refugees 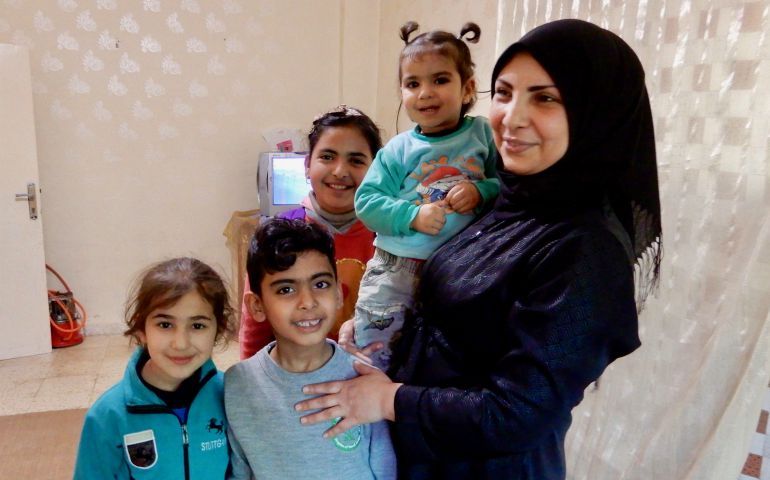 Azraq, Jordan — Jordan's Azraq refugee camp is located in the desolate desert, two hours southeast of Amman. Without a tree in sight, everything in the camp is brown, coated by a desert dust so prevalent even the beige-tinged sky seems to hang low and close.

In perfect rows, three meters between each building, 10,479 corrugated metal huts break up the horizon.

Azraq Camp is the pride of the United Nations High Commissioner of Refugees (UNHCR). Usually, refugee camps are chaotic and messy, with desperate refugees building makeshift accommodations wherever they can. But Azraq is different. It is one of the world's first refugee camps planned, constructed and finished before the first refugees arrived: a refugee camp designed as carefully as a 1950s American subdivision.

Azraq's well-organized layout does have perks: Residents have easy access to healthcare, education, cash assistance and subsidized food at the World Food Project hangar, a cavernous wholesale supermarket. Around 35,000 people are registered as living in the camp that opened in May 2014.

Most Syrian refugees in Jordan do not live in places like Azraq. According to the U.N., 81 percent of refugees in Jordan live in urban areas, finding housing in cramped apartments, working informal jobs that pay in cash, doing their best to get by in the crowded streets of Amman and other cities.

Because the urban refugees are scattered around the city, they have much more difficulty obtaining comprehensive services. Although they also receive refugee identity cards and can get the same support as those in the camps, it is more logistically challenging to inform them of their rights and ensure they receive them.

While large international organizations provide services at the organized refugee camps, many urban refugees are falling through the cracks. As the war in Syria drags on and the refugee situation shows no sign of abating, sisters and Catholic organizations in Jordan are concentrating on aiding city refugees, trying their best to connect them to as many resources as they can muster, or just lending an empathetic ear.

Against a Catholic backdrop, Biden vows increase in refugee admissions