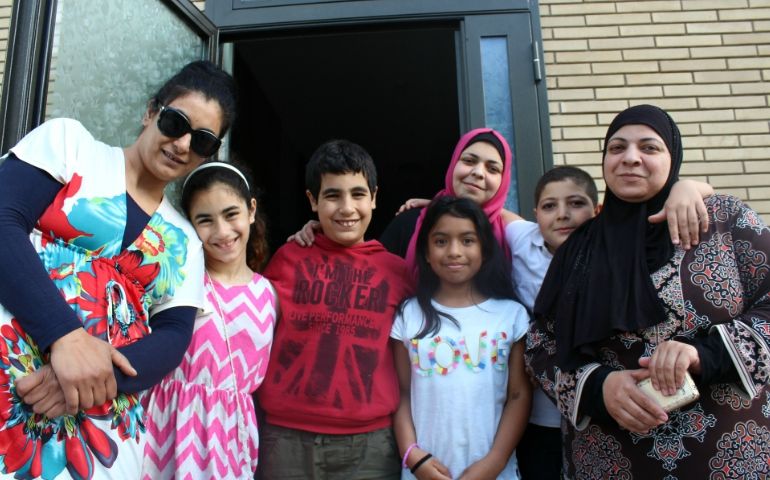 The families of Rasha Meish, left, and Maisa Al Said, far right, outside the resettlement house Casa della Speranza on grounds owned by the Missionary Sisters Servants of the Holy Spirit in Rome. Seen here are children of the two women and family friends. (GSR photo/Chris Herlinger)

Rome and Athens, Greece — A cool late afternoon breeze in the garden on the outskirts of Rome is always welcome for Rasha Meish and Maisa Al Said. It is a gentle reminder that the civil war in Syria is far away.

That war drove the two women's families from their homes. Happily, the day-to-day strains of life in a war zone are now over. But the families, related by marriage — Al Said's brother is married to Meish's sister — must contend with painful memories and a cruel hardship: Meish was blinded from a bomb explosion near her home in Damascus.

Ahead is the next challenging step in resettlement: finding permanent housing and work.

In one regard, the families are fortunate: their temporary residence is a resettlement house — Casa della Speranza, or "House of Hope" — on quiet, shaded grounds owned by the Missionary Sisters Servants of the Holy Spirit, an international congregation founded in 1889 in the Netherlands. The grounds house the sisters' general curia, or administrative offices, with 28 sisters from 10 countries living there.

Now in their second year at the house, the families are easing their way into life in Italy. Their time with the sisters, Al Said said, has "been beautiful — like one family."

But a major change awaits them: As agreed to with the sisters, the Syrians are preparing to leave the home later this year, though the deadline has some flexibility. "They will continue living here with us until they find another house where they can live," said Sr. Francisca Florentin Garcete, a Missionary Sisters Servants from Paraguay.

Resettlement is rarely easy. After the initial trauma of being forced to flee, followed by a period of limbo — in the case of the two Syrian families, a shared experience in refugee camps in southern Lebanon — comes the process of seeking asylum, then creating new lives in a place with a strange language, strange ways and an uncertain future.

We have a moral obligation to take in Syrian refugees

Nine bishops, one abbot dine and dialogue with peace activists