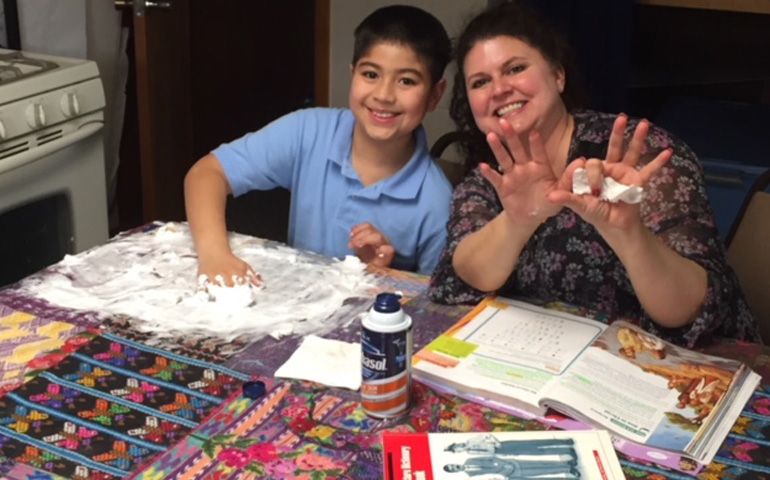 A tutor works with an English as a second language student at Centro San Pablo, a drop-in center for migrants in Salem, Ohio, run by St. Paul Church. They are writing words in shaving cream. (Sr. Rene Weeks)

Toting a sheet of smiley-face stickers and a wagon filled with toys, 3-year-old Jocelyn was fearless. As she played in the living room, covering everyone she encountered with stickers, her mother, 18-year-old Andrea, occasionally paused from cooking to admire her handiwork. Meanwhile, 7-month-old Carlos demonstrated the crawling skills he had acquired that morning.

This happy family scene might not have been possible without Bethany House of Hospitality, a shelter in Chicago's western suburbs, where Andrea, Jocelyn and Carlos (identified by pseudonyms for their protection) currently live. Andrea, who arrived in the United States from Guatemala when she was 17, is seeking asylum for her and her children.

The house, which is sponsored by 28 congregations of women religious and serves female asylum-seekers who arrived in the United States as unaccompanied minors but risked aging into adult detention, doesn't usually shelter minors. But when the staff and board realized that on Andrea's 18th birthday, the small family could be separated or, at best, subjected to poor conditions in family detention, they made an exception.

"Her need was so great and to think of separating her from those two little children, we all had to say, 'We can't say no to this,' " said Sr. Peggy Geraghty, a Sister of Charity of the Blessed Virgin Mary and a Bethany House board member. "We couldn't bear to split one family, let alone all the families that are being split now."

Andrea is one of eight women currently staying at Bethany House. Fleeing dangerous conditions in their home countries, they arrived at the U.S.-Mexico border and were initially put in children's immigration detention — most of them in Chicago or Texas.

The house opened in October 2017 after Sr. Patricia Crowley of the Benedictine Sisters of Chicago called a meeting of congregations in Illinois to discuss how sisters could address immigration issues. It has already housed 17 women (including the current eight) and three children for periods ranging from a week to several months until they are able to support themselves or move in with relatives.

As religious congregations shrink and their members age, collaborative projects might be the future of religious life, Crowley and other board members suggested. With multiple congregations funding the operation and a board made up of eight sisters, Bethany House was able to rent a building with large common spaces and 10 bedrooms, and hire several staff people to manage the house and connect the young women to resources.

This model is one of the many ways that Catholic sisters around the country are supporting asylum-seekers — through services including legal aid, shelter and assistance adjusting to life in the United States.

Asylum-seekers benefit from such intensive support because they face multiple challenges in their efforts to thrive in the United States. Like other refugees, they arrive fleeing persecution and often suffering from trauma, then have to assimilate and support themselves in a new country.

Justice | Seeking Refuge: Sisters shelter, aid asylum-seekers as they adapt to US