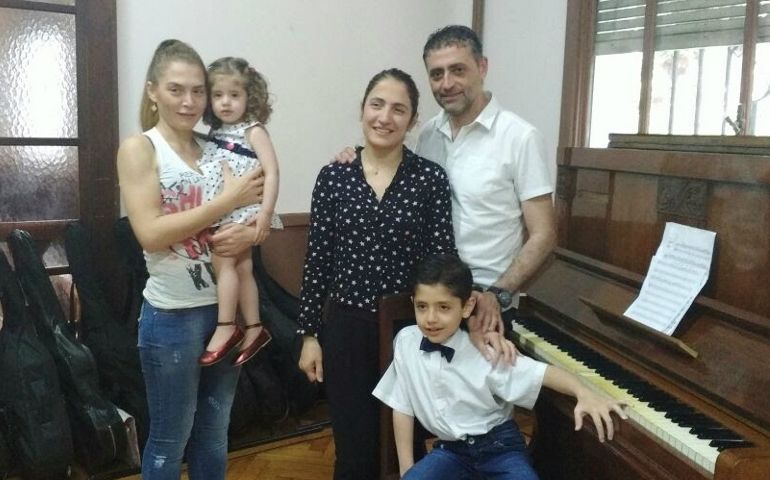 Fadi Ali, far right, stands next to his wife, Hanan, with his children and sister-in-law. (Provided photo)

"When a country is at war, there's no such thing as a safe place," said Fadi Ali, a Syrian refugee currently living with Handmaids of the Sacred Heart of Jesus sisters in Buenos Aires.

Ali is from Latakia, the fifth-largest city in Syria, which is considered one of the safer zones in the war-torn country. However, Ali clarified, "safe" just means there's no direct military combat in the city itself. "But that doesn't mean the people are safe."

"Armed groups are still aiming their missiles to the cities. Every day, we have a bomb, and people are kidnapped by extremists. People are dying there, but you still have to walk the streets to get to work," said Ali, 38. "You have to keep living your life. Just imagine that every time you leave your home, you have to say goodbye to everybody because you don't know if it'll be OK and that you'll be back.

Six years of war has left those in Syria without electricity, water, gas, fuel, medicines, or vital imports, Ali said, and prices increase exponentially while salaries remain the same. "When we talk about war, it's not about missiles or bombs or arms. We're talking about people who can't find basic things to survive. Life is not just a matter of living or dying."

Ali now lives in a Catholic school building, where Handmaids of the Sacred Heart of Jesus sisters took him in, with his wife, Hanan, and their two children, ages 7 and 2, setting up an apartment on the fifth floor. Following a year of online communication and phone calls with the sisters, it is in this apartment where the Alis began their transition from a life amid war in the Middle East to a safe yet foreign life in South America.

First UN summit on refugees, migrants calls all member states to protect them

Nine bishops, one abbot dine and dialogue with peace activists