Sisters, charities care for the abandoned children of Guatemala 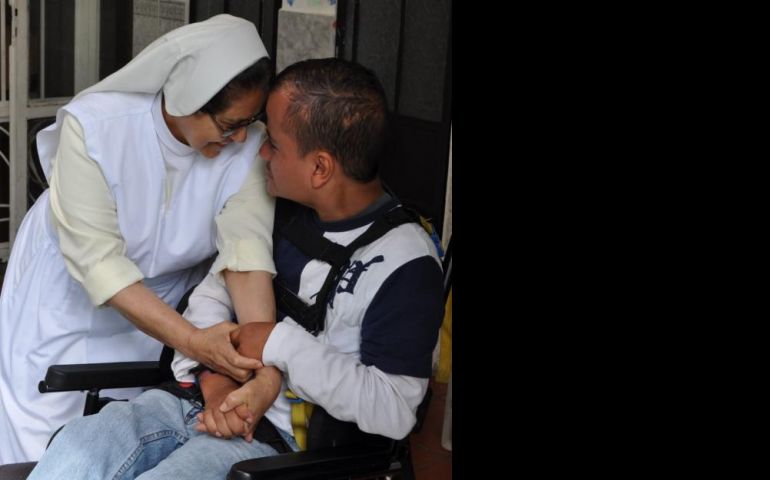 Sr. Dolores Ochoa hugs a developmentally disabled 28-year-old at the Home of Marina Leal Guirola a, an orphanage run by Somoscan Missionary Sisters. Many of children are abandoned at birth and it is left to the church to provide for their care. (GSR photo / J. Malcolm Garcia)

Guatemala City, Guatemala — Sr. Dolores Ochoa leaned over a table and examined a calendar, a statue of the Virgin Mary at her back. Ochoa keeps a wish list of needed donations week by week, month by month. Sheets and blankets. Rice and beans. A leak in the roof needs patching, floor tiles replacing. Cash donations to pay the five staff members of the orphanage.

Nearby, in a sun-dappled courtyard, more than a dozen boys, girls and young adults sat in wheelchairs and answered roll call at Home of Marina Leal Guirola, the orphanage run by the Congregation of the Missionary Daughters of St. Jerome Emiliani (La Congregación de las Misioneras Hijas de San Jerónimo Emiliani, commonly called the Somascan Missionary Sisters) for physically and developmentally disabled children. One girl in the group, 10-year-old Maria, had been enrolled in special education classes at a public school. But the school did not provide physical therapy and she was forced to drop out. Now, through physical therapy provided by a volunteer, she can walk. Unlike many of the other children, she reads and talks. Ochoa tells visitors that Maria is quite bright and needs to be in school, if only the orphanage could find someone to sponsor her. Sometimes the visitors respond with a donation. Not often.

Ochoa closed the calendar and walked into the courtyard to greet the residents as volunteers served them lunch. There was Juan Pablo, 28. Abandoned at a hospital at three, he has been here ever since. The boy next to him, Mario, likes to play rock music. He grew up here, too, referred by the court. The parents just disappear. Leave them at a hospital or the orphanage doorstep with no information. One woman left a note: “He appeared normal when he was born.”

Ochoa, a diminutive woman with large glasses and a sailor’s gait, wandered among the children, distracting them with a smile, a hug, a squeeze of the hand. She felt tired, her mind dwelling on her calendar and its wish list. God provides, she believes, but the stress of her limited budget remains a daily worry.

World | Sisters, charities care for the abandoned children of Guatemala

Catholic sisters are not an 'endangered species'