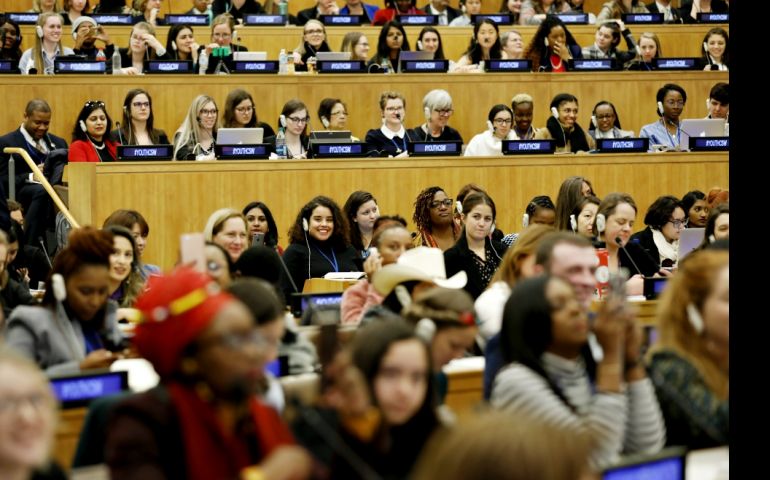 Women participate in an intergenerational dialogue March 13 during the 63rd session of the U.N. Commission on the Status of Women. (UN Women/Ryan Brown, CC BY-NC-ND 2.0)

New York — The 63rd session of the United Nations' Commission on the Status of Women concluded its work late March 22 and affirmed U.N. support for social protections that help in global efforts to end gender discrimination.

Among the recommendations adopted are investing in protections, such as education, that are not as robust for women and girls as they are for men and boys.

The U.N.'s principal commission "dedicated to the promotion of gender equality and the empowerment of women" also adopted a recommendation that progress already made in "women's access to social protection, public services and sustainable infrastructure" not be reversed by austerity measures or budget cuts from national or regional governments.

The commission recommendations are not binding on U.N. member states but rather are seen as a road map or blueprint for them to follow.

Phumzile Mlambo-Ngcuka, executive director of UN Women, the U.N. organization that organizes the two-week annual meeting, said the March 11-22 event has never been "more significant for the women and girls of the world."

"The commission's recommendations pave the way for governments to engage and invest differently; involving women in policy dialogue, and targeting initiatives that go to the heart of the largest barriers to the empowerment and voice of women and girls," she said, according to UN Women.

Catholic sisters are among those in that category, and one of them, Sr. Winifred Doherty, U.N. representative of the Congregation of Our Lady of Charity of the Good Shepherd, characterized the overall final document as "good," though not as strong in some areas as she would have liked.