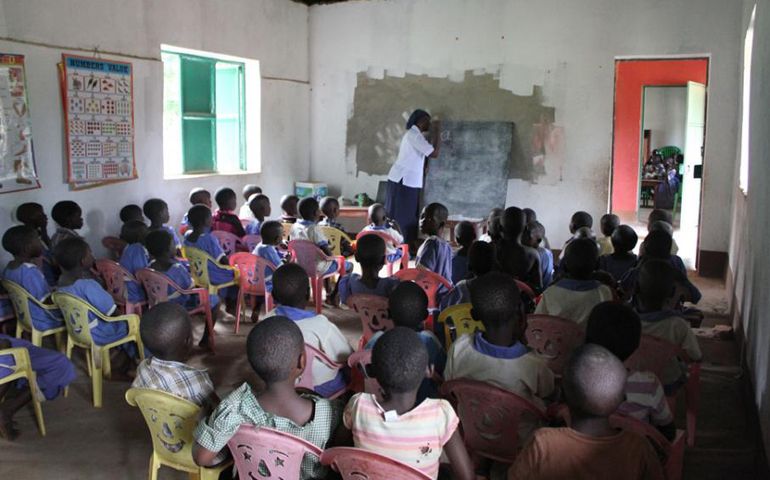 At a nursery school in Riimenze, a small village near Yambio, South Sudan, a sister from Solidarity with South Sudan teaches a class. There are four classes like this, but only two teachers, said Spanish Sr. Anna Sánchez Boira of the Congregation of Missionary Daughters of the Holy Family of Nazareth. (Provided photo)

While South Sudan may be regaining some stability in the wake of recent violence, Catholic sisters serving as part of an interfaith coalition hope that efforts to improve conditions in the world's newest nation can be sustained, but they also warn about the possible escalation of ethnic conflict.

The ethnic component of the recent wave of violence five years after the country's independence "seems to be more and more strong, and the current ceasefire could be followed by more conflict," said Sr. Yudith Pereira Rico, the associate executive director of the church-supported coalition Solidarity with South Sudan. "The risk of reproducing a conflict like Rwanda or Burundi is very possible."

Ethnic loyalty often overrides national identity, Pereira, a Spanish member of the Congregation of the Religious of Jesus and Mary, told GSR in an emailed response to questions late last week as she returned to Rome following a visit to South Sudan.

"South Sudan was formed before the people had a consciousness of being one people," she said.

Extreme poverty following more than two decades (1983-2005) of civil war that eventually resulted in South Sudan's independence from Sudan has exacerbated tensions between ethnic groups. That results in them seeing others as enemies and "making them not ready to unite as one people," Pereira said.

But outsiders -- even countries that support the peace process in South Sudan -- are hurting the situation by selling arms to South Sudan, making the world's newest country also one of its most highly armed, said Pereira, who is based in Rome at the headquarters of the International Union of Superiors General (UISG), one of the founders of Solidarity with South Sudan.

Pope says he, too, kneels on Myanmar streets, begging for end to violence