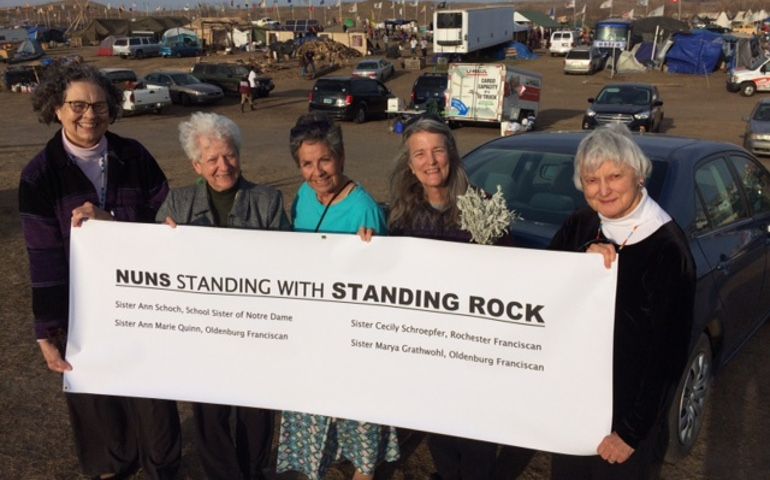 To all gathered she said, "To see my people standing up for our rights, makes me so proud. Whenever I read about the water protectors at the camps along the Missouri and Cannonball Rivers, I pray they fight to the bitter end."

Words from this elder commending the brave commitment of her Standing Rock Sioux to protect their sacred lands and life-giving waters assured us it was right that we had come for two days to be in prayer with people in the camps protesting the Dakota Access Pipeline.

The proposed pipeline will be nearly 1,200 miles long and is designed to carry crude oil from western North Dakota to Illinois. The pipeline will cross or be drilled under just over 200 streams and rivers, including the mighty Missouri River — and it would cross near the Standing Rock Sioux Reservation lands. The estimated 4,000 protesters, known as water protectors, are asking that the pipeline company simply follow the National Environmental Policy Act, which requires an environmental impact study and a cost benefit analysis for projects like this.

We four sisters from Billings, Montana, were on a pilgrimage of mercy for climate justice at the Missouri River and Standing Rock Sioux land. We have ministered with Crow and Northern Cheyenne in Montana and Sioux in North Dakota, and as we traveled across the vast prairie to Standing Rock, our troubled souls were soothed by beauty. Hearts expanded. The two of us went with Franciscan Sr. Ann Marie Quinn, who is from Oldenburg, Indiana, and Franciscan Sr. Cecily Schroepfer from Rochester, Minnesota.

More than 300 flags representing the tribes and countries of the water protectors line the dusty road into the peaceful Oceti Sakowin (Seven Council Fires) Camp. We are pleased that our banner, "Nuns Standing with Standing Rock," is now snapping in the wind among them.

'Would you go and tear up St. Peter's in Rome?'