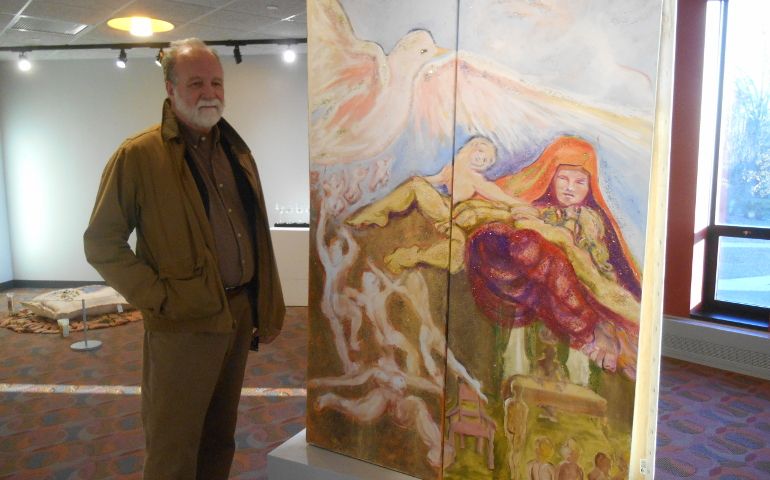 Jesuit Fr. Dennis McNally curated the original “Jesuit Spirit in the Arts” at St. Joseph’s University in Philadelphia in 1976. He is one of 12 Jesuit artists whose work is featured in the 40th anniversary exhibition. (Merecedes Gallese)

Philadelphia — For Jesuit Fr. Dennis McNally, being an artist means being stuck between two worlds.

His work frequently deals with religious themes such as Jesus, conquering demons and the concept of wisdom, often described in feminine terms. His body of work includes more than 160 giant acrylic paintings on canvas, which beautify the walls of a classroom building at St. Joseph’s University in Philadelphia.

But the sometimes edgy, occasionally nude, figures do not go over well in many pietistic church circles, who prefer a Jesus with a more beatific face and his mother without curves. One bishop noted that there is little time for encouraging art in a world where the church is under stress against the forces of secularism.

Yet those forces are not always so welcoming either to a Jesuit priest who regularly deals with religious themes in his artwork.

“Sometimes you work so hard and nobody gets it,” sighs McNally.

“Most of these are dreams,” he says, escorting visitors around his collection. “The dreams are images. When I wake up, I try to recall them.”

Those dreams have found a home on campus here, where McNally has become a fixture. He lived for decades in the student dorms before moving to the Jesuit residence on campus a few years ago.

Neither faith nor magic saves 'Little Boy' from its muddled message

The mind, heart and spirit of Jägerstätter