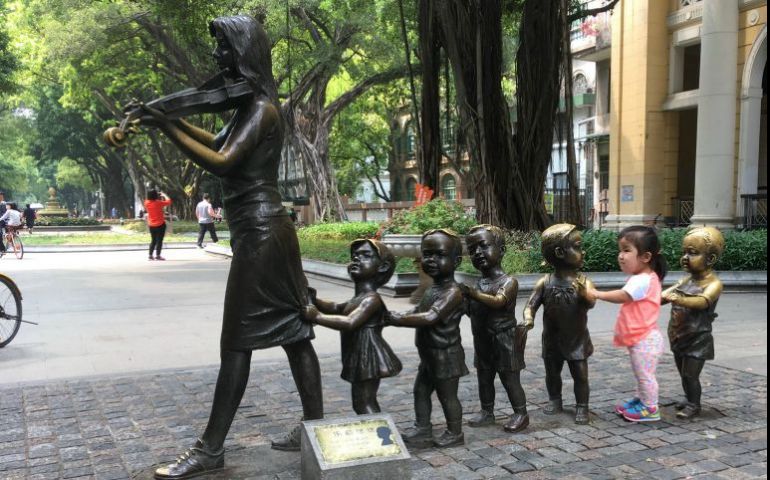 Teagan (Tian Xin Yue) plays at a sculpture on Shamian Island in Guangzhou, China, while her parents, the Worleys of Tennessee, were finalizing some of the last adoption paperwork earlier this year. (Courtesy of the Worley family)

The morning of Dec. 2, 2016, began like any normal day for the Worley family. Robin spent the morning homeschooling her children, Heidi, 14, and twins Noah and Micah, 12. Her husband, Billy Worley, an electrical engineer, was at work.

But then a Facebook post caught Robin Worley's eye, and suddenly their Tennessee, family was changed forever.

"Teagan is 4 years old, has achondroplasia, and is from China. She is one adorable, dimply, beautiful girl!" the post began. Robin Worley and all three of her children also have achondroplasia, the most common form of dwarfism that affects the long bones in the body. People with this type of dwarfism generally have average-sized torsos but much shorter arms and legs.

Billy Worley, Robin's husband, does not have dwarfism, but the couple's biological children had a 50 percent chance of being born with the genetic condition. And all three children inherited the dwarfism gene.

Something about the post made Robin stop short. The family did not have plans for additional children. But an accompanying video of Teagan, who the post said was in foster care at the time, reminded Robin so much of Heidi, her eldest daughter. Both had the same mannerisms, and the video sealed the deal: Teagan belonged with them.

"We just felt like, we had a peace about it," Robin Worley recalled of seeing the Facebook post. "It wasn't something we thought about not doing. We just felt called to go get her."

When Robin showed the Facebook post to her kids, they immediately fell in love as well, yelling, "Yes! Yes! We want a sister!"

Should we have kids?