Tutsis and Hutus practice the multiplication of love and fishes 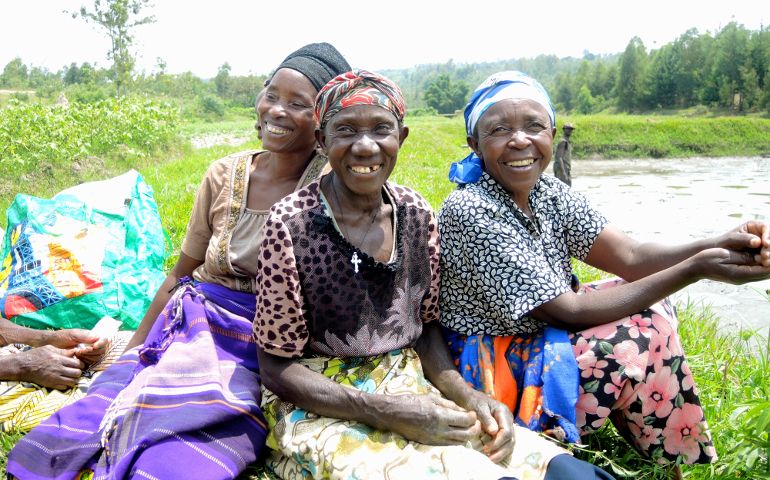 These are some of the Hutu and Tutsi women involved in a fishing project cooperative called Dususuruke ("Warm Solidarity"), which concentrates on both psychological reconciliation and economic empowerment, in the village of Gisagara. (GSR photo / Melanie Lidman)

Gisagara, Rwanda — When Sr. Mary Rose Mukukibogo first approached women in Gisagara, southern Rwanda, about starting an agricultural association, they were furious. It was 1997, three years after the 100-day genocide in 1994 that killed more than a million people during the fighting and the chaos afterwards. Mukukibogo, a member of Les Soeurs Auxiliatrices (Helpers of the Holy Souls), remembers walking from house to house in the district near the southern city of Butare, asking them if they'd like to join a farming cooperative.

In 1994, Rwanda lost 13 percent of its population in the course of a single season, the result of a civil uprising between the Hutu, a peasant majority, and the Tutsi, the minority ruling class. After the genocide, infrastructure lay in ruins. The rural farmers, who had barely eked out a living before the killing, found themselves thrust deeper into poverty. Most men of working age had been killed, were imprisoned or fled to neighboring states as refugees, making economic recovery even more challenging.

"It was very difficult for them to do any type of activity, because their spirit was so low," recalled Mukukibogo, a genocide victim herself who lost multiple siblings in the genocide. "I started to accompany them to have hope in life."

Rwanda is a communal society, and farming associations have been a part of community life for hundreds of years, through "Ubudehe," or mutual field cultivation. Slowly, Mukukibogo built a group of genocide victims, all of whom had lost their husbands, to start farming together.

Charlotte Nyiromasuhuko, 58, was one of the first women to join, and today she is a respected leader within the group, divvying up jobs and overseeing the harvests. "I wanted to join a group to talk and move away from isolation," Nyiromasuhuko said, of the difficult period directly after the genocide. "I joined this association to move away from isolation and fight against the hard times."

After two years of working with just genocide victims, Mukukibogo challenged the women again, opening the farming association to those whose husbands were in prison for genocide crimes. This forced Hutu and Tutsi women together, just a few years after ethnic hatred between the two groups had boiled over into wanton killing.

Rwanda is a unique situation in that the perpetrators and the victims were forced, almost immediately after the genocide, to live side by side. Visit Rwanda today and it is impossible to tell who is Hutu and who is Tutsi. This is partly due to a Rwandan law that made talking about ethnicity illegal, and partly due to a countrywide desire to concentrate on the future and rebuild the Rwanda as a technology and innovation hub. But this process didn't happen overnight.

| Tutsis and Hutus practice the multiplication of love and fishes