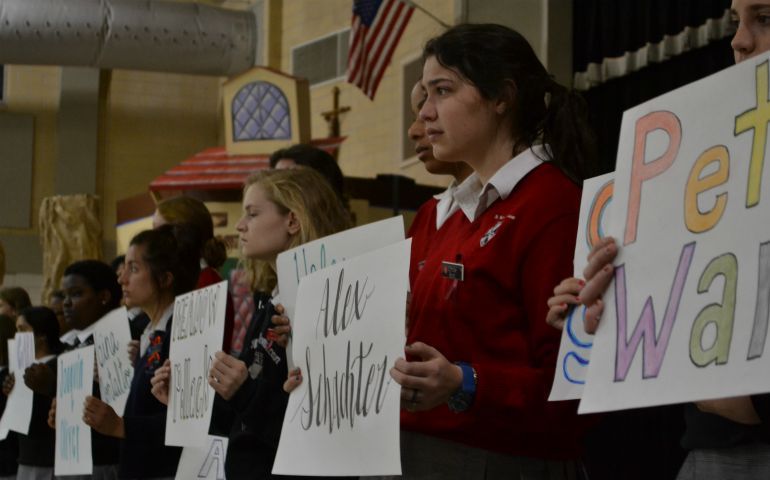 Students at St. Mary's Dominican High School in New Orleans gather March 14 for 17 minutes to pray and remember the 17 students and faculty members killed in a Feb. 14 shooting in Parkland, Florida. Students carried signs with the names of those who died, and the Hail Mary was recited after each name was read. The school is run by the Dominican Sisters of Peace. (Courtesy of the Dominican Sisters of Peace)

Thousands of people are expected to take part in the March For Our Lives event March 24 in Washington, D.C., and the more than 800 "sibling marches" planned worldwide. Hundreds of sisters will be among them.

The march is to demand that children be safe from gun violence in their schools.

"We have worked for years and years to support all sorts of efforts at much more comprehensive gun control at local and national levels and even internationally," said Eileen Harrington, a co-member of the Loretto Community and its mission activities coordinator. "But the problem of gun violence just continues to escalate."

Loretto sisters will participate in local marches, and Loretto volunteers will join the national march, she said.

Harrington said the community knows a march will not solve the problem of gun violence, just as their years of efforts — including supporting the international Arms Trade Treaty at the United Nations — have not seemed to have an effect. But she said that doesn't mean those efforts can stop.

People | US Catholic sisters plan participation in March For Our Lives