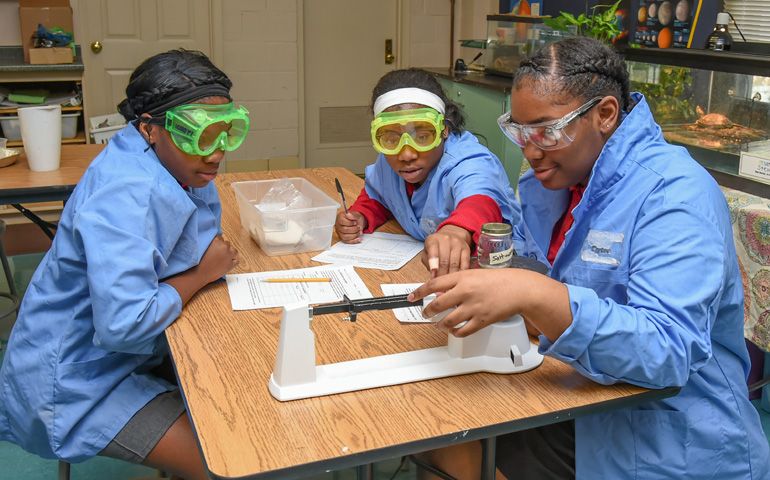 Every night, the Carmelite Sisters of Baltimore gather together in their monastery to watch the news — the BBC before dinner and one of the national networks afterward. Because they're committed to a life of prayer that keeps them at the monastery, it's a ritual that keeps the sisters informed and, of late, somewhat horrified as they've watched story after story of police brutality against black persons.

The sisters have been most shocked by the stories of police violence coming out of their own Baltimore. Sr. Judy Long's perennial joke is to refer to her community as "Nuns Without Borders" because their prayers defy geographic limitations. But even so, said Sr. Patricia Scanlan, there's no mistaking that Baltimore is the sisters' raison d'être.

"We're known as the Baltimore Carmel. All of Baltimore — all that concerns Baltimore, all the people of Baltimore, the events, the happenings — are in our prayer," Scanlan said.

It's easy to equate police violence in Baltimore with the story of Freddie Gray, the 25-year-old black man who sustained fatal injuries to his spine while in the custody of the Baltimore police in 2015. Gray's death dominated public interest for more than a year and inspired days of protest and unrest.

But there's another story from Baltimore that speaks to the misogynoir, or the hatred and violence directed at black women, that can persist, not only in law enforcement, but also in the movements seeking to protect black lives.

Less than a year after Gray died, Korryn Gaines, a 23-year-old black woman, was killed by a white Baltimore County police officer who had come to her apartment with an arrest warrant following Gaines' failure to appear in court for a traffic violation.

Police say that after they obtained a key to the apartment, they found Gaines, a legal gun owner, inside, armed with a shotgun. A next-door neighbor said a SWAT unit had surrounded Gaines' apartment and drilled holes in the walls in order to install surveillance equipment. He also wrote that Gaines asked police to put down their weapons first. A six-hour standoff ensued, ending when Officer Royce Ruby Jr. — who has since been promoted to corporal — fatally shot Gaines and wounded her 5-year-old son, Kodi.

A few local protests were organized for Gaines, but she never became a household name like Gray.

That a man's violent death would overshadow a woman's is hardly an isolated incident, as the African American Policy Forum explained in a 2015 report.