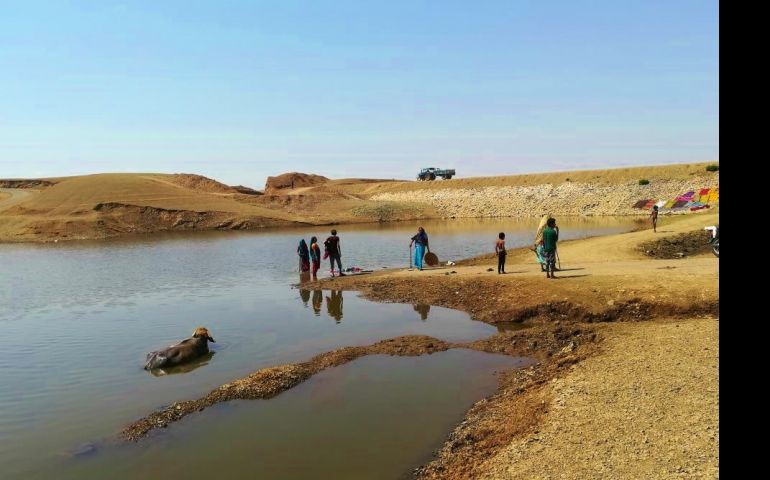 People and animals bathe in the pool created by an old check dam repaired with government support through an initiative of the Holy Spirit Sisters in Goeka Pargi village, Banswara district in Rajasthan state. (Saji Thomas)

Goeka Baria, India — Until a decade ago, Hatu Devi could not even think of going to a grocery shop near her house. The resident of Jalimpura village of Banswara district in the northwestern Indian state of Rajasthan had to depend on her husband or other male members in the family to meet the family's needs.

Since her marriage at 13, Devi had to always cover her head and face with her pallu, the edge of a sari. She was not allowed to talk to men, even men in her family, except in an emergency.

"Even then, I had to ensure that my face was not seen and head bowed, as face-to-face conversation was not the norm then," Devi, now 48, told Global Sisters Report.

But the world has become different for the mother of three today, thanks to a group of Catholic nuns.

"I no longer depend on my husband or others. I manage on my own now," she said.

Hatu Devi is among hundreds of villagers in the northwestern Indian state of Rajasthan who had life-changing experiences after the nuns started working among them in 2012. Through water projects, micro-loans, farming diversity and other means, the nuns not only checked migration of villagers to cities but also fought several social evils that subjugated women, such as child marriage.

Devi said she is bold enough now to go to the police station if required. As a village council member, she discusses issues facing Jalimpura. The village council passes local issues and forwards them to higher government bodies to be carried out.

Muslim-American women seek change from within