'We have each other's backs ... We will not be afraid' 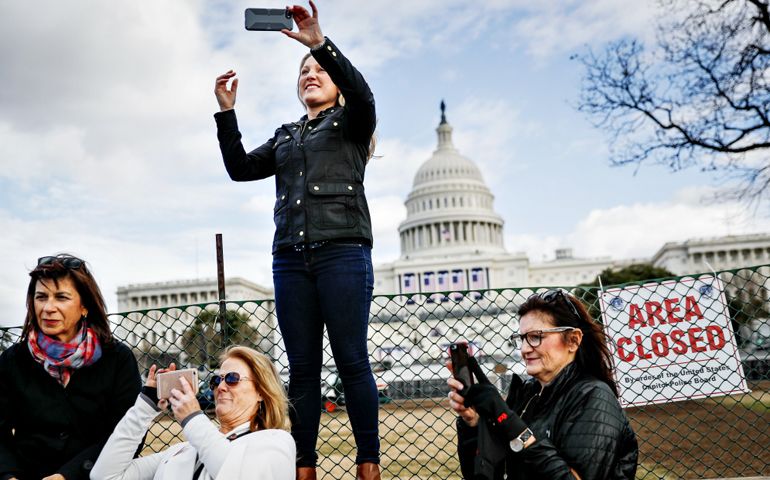 Micaela Johnson, of Leawood, Kan., in town to take part in Saturday's Women's March on Washington, takes a selfie with the Capitol Building in the background Jan. 18. (AP/John Minchillo)

Sr. Jo'Ann De Quattro made her travel arrangements from California to Washington, D.C., last summer because she thought she would be attending Hillary Clinton's inauguration.

When Donald Trump won the election on Nov. 8, De Quattro, a Sister of the Holy Names of Jesus and Mary, considered canceling her flight. Then she learned about the Women's March on Washington.

Hundreds of thousands of people are expected to assemble at the National Mall for the march on Jan. 21, one day after Trump's presidential inauguration.

"In the spirit of democracy and honoring the champions of human rights, dignity, and justice who have come before us, we join in diversity to show our presence in numbers too great to ignore," the rally's mission statement says. "The Women's March on Washington will send a bold message to our new government on their first day in office, and to the world that women's rights are human rights. We stand together, recognizing that defending the most marginalized among us is defending all of us."

Plans for the march started one day after Election Day, when Teresa Shook, a retired attorney from Hawaii, created a private Facebook event page inviting her friends to join her in protesting the election results. The event page went viral overnight, with thousands of people registering to go.

Will the March become a movement?

Breadth of Women's March was its greatest strength