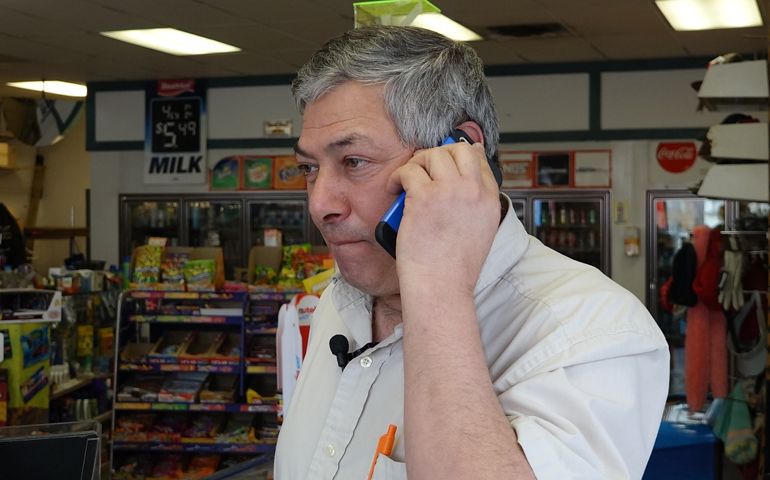 Hassan El Khodr translates for a Syrian refugee at the doctor's office, from his convenience store in Chatham. (Dana Wachter)

Hassan El Khodr nodded on the phone, listening intently to a Canadian medical professional speak in English so he could translate instructions in Arabic to a newly arrived Syrian refugee visiting the doctor.

El Khodr said it's been like this over the last few months. He answers phone calls from new Canadians from Syria, ready to translate for doctors, teachers or other businesses, in between smiles and greetings to customers buying gas or soft drinks from his convenience store in Chatham.

Members of Chatham's Catholic community recommended El Khodr to help Sr. Eleanor Gleeson and Sr. Kathleen O'Mara of the Ursulines of the Chatham Union and their team support Chatham's first Syrian refugee family. He has worked with the Catholic community for the last 10 years through his active role in the Chatham-Kent Muslim Association.

"I think everybody has had their hearts and eyes opened in a way," Gleeson said.

For sisters and organizations helping resettle Syrian refugees in Ontario, reaching out to help the families means relying on others in the community and forging new paths toward interfaith cooperation.

El Khodr, a Lebanon native, has been in Canada for 30 years. As an Arabic-speaking immigrant, he sees translating for newcomers as his responsibility, but he's proud to help bridge the gap between Syrian refugees and their Canadian sponsors of any religious affiliation.

We should not fear Syrian refugees