Toward a more feminist economy 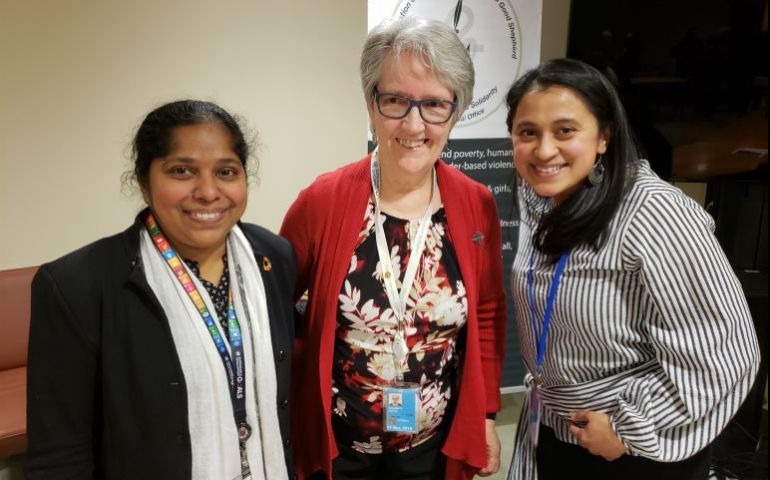 Sr. Cynthia Mathew, who represents the Congregation of Jesus at the United Nations, joined at a Feb. 19 event at the United Nations by, left to right, Sr. Winifred Doherty, U.N. representative of the Congregation of Our Lady of Charity of the Good Shepherd and Bhumika Muchhala, an independent policy analyst and consultant on development economics, global governance and international political economy issues. (GSR photo/Chris Herlinger)

New York — Would the world be a better place if women had more say about the global economy?

It's a question posed regularly when sisters and representatives of nongovernmental organizations gather at the United Nations and discuss how best to tackle the challenges of global poverty and gender inequality, such as during the recent meetings of U.N.'s Commission for Social Development and Commission on the Status of Women.

During those meetings, held in February and March, respectively, discussion about a possible "feminist economics" circled around the belief that baseline social protections like education and health care are basic human rights and need to be accessible to all people, regardless of how much they earn.

Another concern: attention to the environment and an urgent realigning of economic and social values based on respect for the Earth and mindful of the reality of climate change.

"From ancient times, Earth has been considered a feminine reality," said Sr. Ana Martinez de Luco, an environmental activist in Brooklyn, New York, and representative of Sisters for Christian Community at the U.N.

"Caring is an attribute that in most species, including humans, is related with females," she said. "A feminist economy never will put profit over care of resources, over care of the Earth, our common home."

Unfortunately, a common characteristic found throughout "our common home" is that "both women and Earth are on the receiving end of patriarchy, used and exploited for profit," said Sr. Elsa Muttathu, who represents the International Presentation Association at the United Nations. "When Earth is affected or overexploited, women and girls are affected first."

In poor rural areas, for example, they do much of the work "close to the earth," including farming or fetching water, and know the Earth in a kind of intimate way, said Maryknoll Sr. Marvie Misolas, the representative of the Maryknoll Office for Global Concerns at the U.N.

Pope to scientists: Help protect health of planet and its people

Staring down climate despair through kinship