Working group urges UN to step up the fight against homelessness 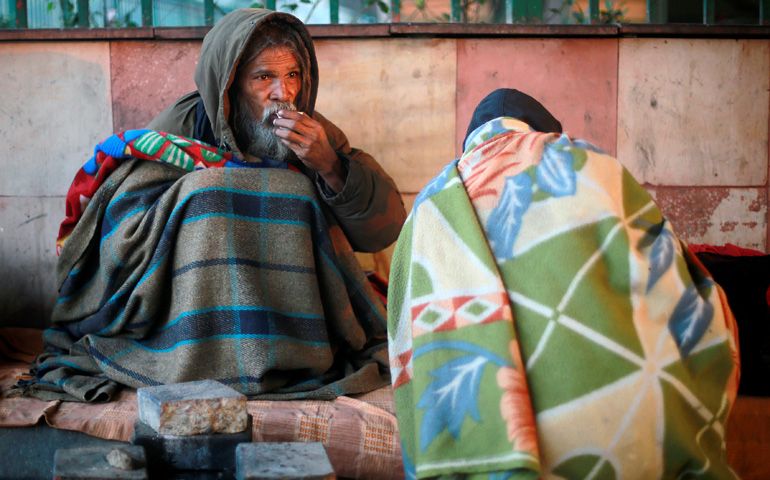 A homeless man wrapped in a quilt drinks tea as he sits under a bridge Dec. 18, 2018, in New Delhi. (CNS/Reuters/Adnan Abidi)

The United Nations is no stranger to the issues of poverty, women's rights, climate change, the nuclear arms race and other pressing challenges. But the global body has yet to tackle head-on one social problem visible on the streets of the world's urban centers: homelessness.

That may be changing, though, as sisters and other religious are bringing the issue to the halls of the global body.

"It's a global issue, but it hasn't been viewed as such," said Sr. Veronica Brand, who represents the Religious of the Sacred Heart of Mary at the U.N. "It's an issue that touches on so many things. It's not just about housing, but connected to so many social issues across the world: jobs, rising economic inequality, social protections."

Sr. Margaret O'Dwyer, one of two representatives of the Company of the Daughters of Charity at the United Nations who, like Brand, is a member of an NGO (nongovernmental organization) Working Group to End Homelessness, said there are "multiple breaches of human rights" connected to homelessness, which can involve poverty, migration or climate change.

The 27-member working group is harnessing the concern about homelessness among sisters and other religious, pushing the United Nations to formally take up the problem as an emerging issue of focus and concern, perhaps as early as next year. The body was formed in 2017 and has roots among the Vincentian Family, the global Catholic movement that follows the example of St. Vincent de Paul.

The Vincentians established a Vincentian Family Homeless Alliance the same year to mark the 400th anniversary of the birth of the Vincentian charism, said Vincentian Fr. Guillermo Campuzano, the Congregation of the Mission's U.N. representative who chairs the NGO Working Group to End Homelessness. The Vincentian advocacy work prompted Campuzano and others to form the U.N. working group to include both religious and secular advocacy organizations that work at the United Nations.