Skip to main content
Spirituality
A version of this story appeared in the July 17-30, 2015 print issue under the headline: "Priest fills sabbatical with stories". 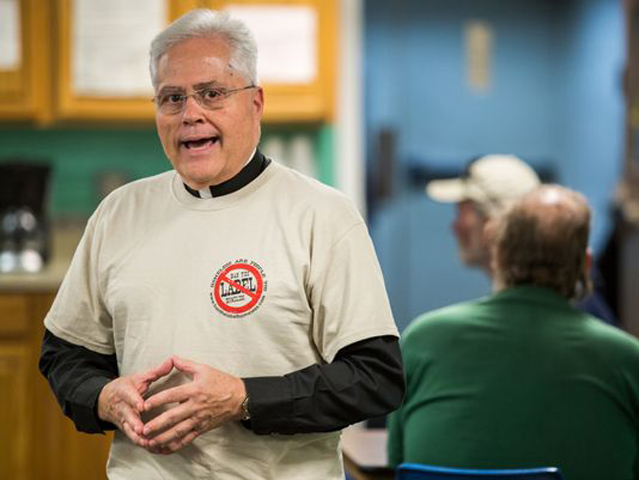 Fr. Paul Mast speaks to homeless men at St. Andrew's Place, one of the shelters he stayed at during a six-month sabbatical on Oct. 6, 2014, in Wilmington, Del. (The News Journal/Keyle Grantham)

After six months on streets and in shelters among the homeless, Fr. Paul Mast has learned the meaning of “Life as a Locker.”

The phrase has become more than a chapter title in his diary of life among the homeless, which he titled Street Sabbatical: Life Lessons for a Contemplative Beggar and published last year. “Life as a Locker” is a metaphor for “distinguishing between my wants and my needs,” the Wilmington, Del., priest told NCR in May.

Mast described life in Andrew’s Place, a shelter in Wilmington where he spent two nights during Thanksgiving week in 2013, living among 19 homeless men and stuffing his assigned locker with a few toiletries, two sweatshirts, socks, pajamas and change of underwear. He also hid his Kindle and recharger among the stash, considering them essentials during hours when the men had to vacate the shelter and he would go to a library or coffee shop and record his experiences.

After all, Mast was not coveting the company of the homeless because he was a good priest and felt pity for them. He had more selfish reasons for wanting to commune with people so seemingly different from those he had known during his years as a retreat master, chaplain, teacher and spiritual director.

Fr. Paul Mast speaks to homeless men at Andrew’s Place, one of the shelters he stayed at during a six-month sabbatical, on Oct. 6, 2014, in Wilmington, Del.