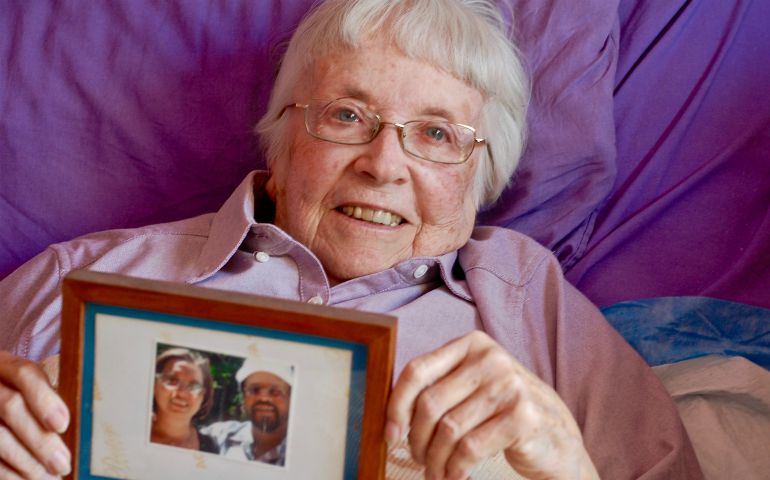 Amityville Dominican Sr. Sally Butler holds a picture of Carlos Cruz and his wife, Georgine Cruz. Butler raised Carlos Cruz from the time his mother died when he was 12 as if he were her own son. (GSR/Dan Stockman)

It's a gorgeous spring day, and the sunshine is pouring into the bedroom of Dominican Sr. Sally Butler's apartment in the Fort Greene neighborhood, brightening the already cheery lavender-painted walls.

Butler's eyes are bright, especially when she talks about how Jesus was a poor working man who lived among the outcasts, a model she has tried to live since moving to the neighborhood in 1968.

"That's what keeps me going," Butler says. "You can meet Christ in many ways. And if that's what a sacrament is — meeting with Christ — then I'm OK. I've never felt deprived. Whatever my faith is, it's very simple."

Butler, 86, can't get out of bed because of spinal stenosis and arthritis. And even if she could, for the past 24 years, she says, she has had to find her connection to Christ outside the church.

Though she has been in religious life for nearly 70 years, Butler is unable to believe in the institutional church anymore. But her faith in God, she says, has never been stronger.

Butler's faith in the church began to crack in 1993.

She was walking through one of the many public-housing projects in Fort Greene when she realized she hadn't seen a woman she knew in church lately, so she stopped in. The woman told Butler she had recently learned that one of the priests at St. Michael-St. Edward parish nearby had molested her son 20 years before.

Note: Because of the sensitive nature of this story’s subject matter, NCR is not allowing comments on this page. For more explanation, see editor Dennis Coday’s comments here.