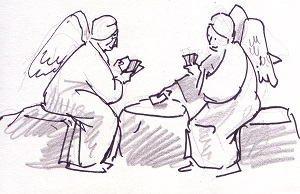 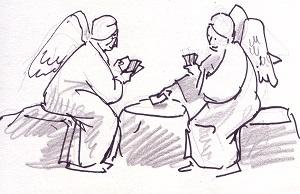 The Lectionary gives us two chances to celebrate angels, both the little guardian angels and the big archangels sent as messengers to the world.

I prefer the feast of the personal angels, who kept watch over me as a Catholic child with a lively imagination. I remember serving at the early Mass and hearing the rustling of wings at the consecration. I gave my angel a secret name and, even as an adult, find myself saying “thank you” when things work out in some surprising way.  Someone is watching out for me. I have my own secret service detail.

Jesus knew the intimate closeness of children to God as the source of their innocence. He said their angels were always gazing at the face of God, which is why the abuse of a child is always such a tragedy for both child and abuser.  The offense fouls so directly and deeply the one relationship we all need most.

I imagine the big archangels like Michael, Gabriel and Raphael, waiting at the edge of timeless eternity for special assignments to cross over into the material and time-bound universe to deliver a message.  Moments in history that tip the balance or change the normal paradigm are evidence of immense forces that spill over into our worlds.

Prophets feel the energy and watch the collective impact as it spreads.  Most of us feel the change over time, often a long time, knowing it only in hindsight.  I see Vatican II as such a moment, and I am moved to see Pope Francis recognize the grace released 60 years ago opening up a door for a church in crisis. “Take the next step, People of God. Don’t be afraid. Walk into the light.”  Crisis reveals opportunity.  A synodal church is the fulfillment of John XXIII’s vision and it offers the church now a way forward.

The story of Nathanael at prayer in today’s Gospel also captures the mystery of the intimate links we have to heaven. We open up ladders of angels coming and going between earth and heaven when we pray.  We entertain new possibilities when we ask for God’s grace. Nothing is then impossible where faith opens the door. Jesus by his Incarnation was that living ladder, so he knew Nathanael intimately because he saw him at prayer. Angels surround us in the same way when we pray.