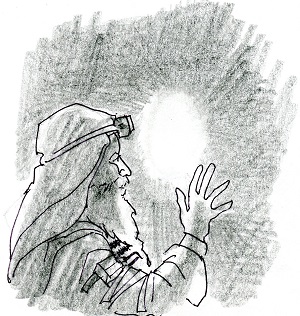 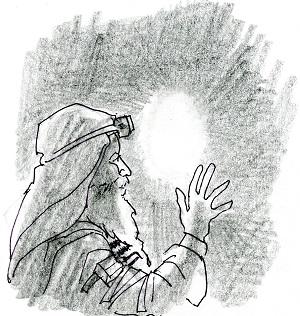 Luke’s story of Zechariah’s encounter with the angel in the temple has many similarities to the account of the wife of Manoah in Judges. Human conceptions by a barren woman and for a couple past child-bearing years accentuate the role God is playing in salvation history. This divine intervention culminates in Luke’s next story about Mary’s conception of Jesus without the agency of a human father. Angels appear in each story to highlight this transcendence.

Zechariah emerges dumbstruck from the inmost sanctuary of the temple, the Holy of Holies, unable to speak about what has happened until after his son is born and circumcised.  Then he will break into song, blessing God for keeping his promise to save his people.  His canticle will parallel Mary’s canticle, the Magnificat.  The tongue of the mute will sing.  The poor will be lifted up.

Zechariah and Elizabeth also show that being righteous in the Law had not merited the blessing of a child. They had no future. We are at the threshold between the old dispensation under the Law and the new dispensation under Grace.  Everything from here on in is pure gift, God’s doing. Human obedience, worthiness, understanding or hesitation and doubt do not hasten or hinder God’s plan. The fullness of time has come, and God’s Word enters history in the flesh.  John is born to prepare the way for Jesus.

This acceleration of the story toward Christmas is meant to quicken our anticipation of the mystery of the Incarnation, which is not just about Jesus, but about all of us.  Something new is happening. Human history, blocked by sin and cut off by death, is now open to a new Creation and a divine destiny.  God speaks the divine Word in the person on Jesus, who comes like a light into the darkness.

Now it is our time to respond. As The prologue to the Gospel of John says: “To those who accepted him he gave the power to become the children of God” (John 1:12). Christmas is an encounter, a revelation and a dialogue.  Mary listened to the Word so totally it became flesh in her womb, and so we are invited to receive, carry and give birth to Jesus in our own lives.  This is the meaning of Christmas and the joy of the Gospel.