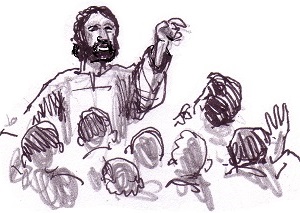 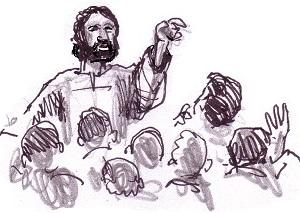 “Jesus rebuked them, and they journeyed to the next village” (Luke 9:56).

James and John, the sons of Zebedee, were among the first disciples called by Jesus. What was it about these two fishermen brothers that would make them into good Apostles? Luke identifies them as the “Sons of Thunder” and backs it up with stories about their stormy personal approach to ministry. A Samaritan town does not welcome them, so James and John are ready, like ancient prophets, to call down fire from heaven to consume them.

Earlier, they see somebody not of their group casting out demons in Jesus’ name, and they rush to stop him. They are ambitious and competitive, but sly enough to have their mother lobby for them. Why did Jesus call these two hot-tempered and devious brothers from their fishing boats to be among his closest companions? Why, for that matter, was Judas Iscariot added to the group?

We romanticize the Apostles in the same way we romanticize the entire New Testament. The bones of the story are that a hillbilly carpenter called smelly fishermen to be his partners and, gathering others of dubious repute along the way, headed down to Jerusalem to take on the establishment. That the carpenter turns out to be the Son of God does not change the earthy reality of the story or transform its actors into always likable heroes and saints. That would come later. What Jesus assembled as his inner circle was more like a sampler for all human weakness than a dream team. The Gospel enters a messy world and works through sinful people to uncover the divine mystery within history.

We read history looking for heroes who advanced our agendas against the resistance of timid and stubborn protectors of the status. If you are an old liberal, this is how you remember Vatican II. One pope liberates the church, his successors slow the reform. Our current pope is trying to bring the church full circle to complete the first pope’s vision of the pilgrim People of God walking and talking to hear the voice of the Holy Spirit pulling them into the modern world, but not without resistance.

History is seldom straight-line or simple. In the NYTimes obituary for Jesuit church historian John O’Malley, author Clay Risen notes his appreciation of the dynamism within tradition. “… history is rarely about continuity versus change; rather it is the result of both forces happening at the same time“ (9-20-22).

Pope Francis has shown his own appreciation of dynamic tradition by pairing John XXIII and John Paul II for canonization in 2014. One started a revolution and the other did much to slow its advance. Canonizing both men together blessed the reality of how the world actually works, not as straight-line narrative but as stutter-step display of conflict and resolution.

This is how we got the Gospel through a 2,000-year-old process of knock-it-down-and-drag-it-out brawling by imperfect people. This is the ebb and flow of grace in human veins and, whether it is about religion or politics, we will make progress. In the short or long term, the Holy Spirit will guide history toward the Beloved Community that is God’s will for Creation.