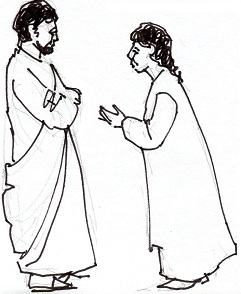 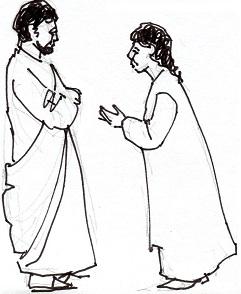 This story is awkward because of Jesus’ apparent rude behavior.  Scripture scholars and preachers bend over backwards to explain that Jesus only refused to speak to the Canaanite woman and then called her a dog to test her faith. Another possible interpretation is that this was in fact a teachable moment for the human Jesus that expanded his understanding of his mission. This possibility can challenge our understanding of Jesus.

By the fourth Gospel, Jesus is fully aware of his divine identity, and so nothing he says or does is unintentional or without deeper significance. But the earlier Gospels, beginning with Mark, let Jesus learn and grow into this awareness led by the Spirit and by his experience. In Mark’s much shorter account of this north of the border encounter (7:24-29), when the woman begs Jesus to heal her daughter, he uses a common racial slur Jews had for pagans as “dogs.” When she throws the metaphor back at him, he is surprised by her faith, and she gets her wish.  God is apparently at work in people outside of Israel. How remarkable it is that the Spirit chose a pagan woman to teach Jesus, a Jewish man, this lesson.

Matthew enlarges the story for his own purpose. His faith community in Antioch was predominantly Jewish converts but fast attracting more and more pagan converts. He uses the story to show his Jewish members that Jesus was open to the expansion of God’s Kingdom beyond Israel. Matthew heightens the drama by calling the woman a Canaanite, the traditional enemies of the Hebrews when they entered the region with Joshua. God’s original “Chosen People” now includes their former enemies and, potentially, the entire world.

The importance to us of seeing Jesus learn and grow as part of his human development and obedience to the Spirit is that we, too, must grow and change.  For white Christians, acknowledging cultural prejudices and deep social formation about race has become a critical threshold to cross, especially for those who think they can’t possibly be racist.

The early church was born in traumatic transition from its Jewish roots to universal diversity, carrying a Gospel that was open to Canaanite women, Roman centurions, good Samaritans and God-fearing Greeks. Jesus’ Semitic appearance, closer to today’s Egyptian than the European faces found in religious paintings hanging in U.S. churches and funeral homes, should make us wonder if even our mental models of Jesus and the early church are reliable.  It is an exercise in stretching our imaginations and faith.

If Jesus could grow from firmly believing that he was only sent to the lost sheep of the house of Israel to surrendering his life on the cross to save the whole world, we can open our lives to everyone as equal in dignity and worth and bearing the image of God Jesus revealed as the divine face of humanity.