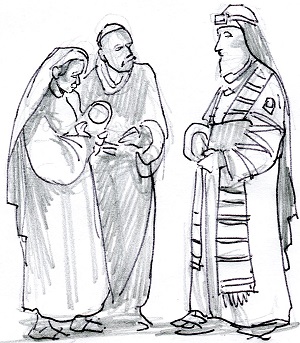 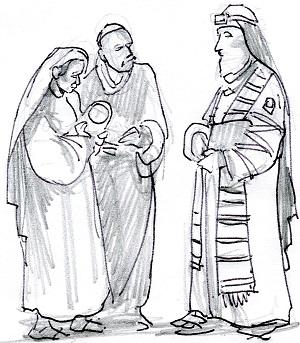 Today the church celebrates a moment in the life of Mary, the mother of Jesus, that is based on a longstanding tradition without biblical reference but assumed to have happened.  Every Jewish child was brought to the Temple and symbolically presented to God. As someone called “full of grace,” even as a child Mary represented a goodness fitting to the future mother of God.

By their simplicity and trust, children move us to guard their innocence and to protect them because of their vulnerability.  A new PBS documentary, “For Sama” is about a young woman in Aleppo, Syria, who video recorded her life during the brutal siege of the city. Her camera captured in graphic horror the impact on thousands of children, including her own daughter, during the relentless bombing, from shortages of food and medicine, and from overwhelming anxiety and trauma.

In today’s Gospel, Jesus weeps over the city of Jerusalem for the failure of its leaders to seek peace and avert the terrible war with Rome that devastated the population and destroyed the temple and city. He specifically cites the toll on women and children: “They will smash you to the ground and your children within you.”

During his visit to Thailand and Japan, Pope Francis will visit Hiroshima, the site of the first use of an atomic bomb by the United States at the end of World War II.  There, he will call for a ban on all nuclear weapons. He will visit a peace museum and see the millions of peace cranes folded by children all over the world as their cry for peace and the chance to live out their lives without the threat of annihilation.

Children are ambassadors for peace and prophets who represent a future filled with grace instead of continuous warfare and the inevitable use, by design or by default, of weapons of mass destruction. Jesus wept because the people of his time failed to recognize the hour of their visitation. Pope Francis is hoping that that in our hour we will listen to the voices and tears of our own children asking us to give peace a chance.