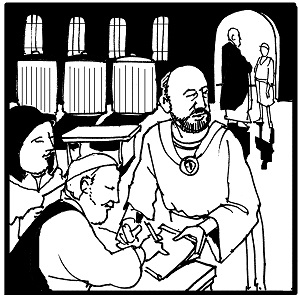 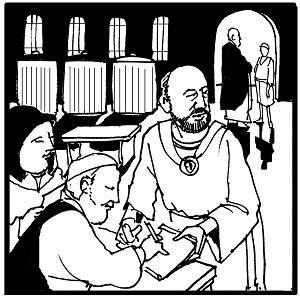 Jesus knew that people worried about money, and so he used the theme of finances and employment in many of his parables. As a financial adviser, he would not last very long in this world, but this was because his message went beyond this world to transcendent truths.

Today’s parable is about a “dishonest steward,” and the man Jesus describes was indeed underhanded in dealing with his boss’s debtors. He reduces their debts in order to ensure that he would have friends when his master dismissed him. The shocking and unlikely outcome was that the master praises the steward for being “prudent” instead of a thief. How are we to understand such a story?

Jesus’ parables have a common theme. They reveal the extravagant richness of God in dealing with sinners. The rich owner in today’s parable stands alongside another master who forgave a servant a huge debt in the expectation he would do the same with a fellow servant who owed him a small amount. Or in another parable, the owner of a vineyard pays latecomers the same wage as laborers who had worked all day. Or a shepherd leaves 99 sheep in the wilderness to search for one lost sheep. Or a rich patriarch welcomes home a son who has wasted his inheritance.

These stories challenged audiences to exceed the logic of this world to imitate God, who is always forgiving and merciful. Jesus praises the dishonest steward for the “prudence” of forgiving the debts of others. He himself is like that steward in breaking the rules about avoiding sinners when he eats with them and preaches God’s unconditional mercy to them. He stirs the indignation of religious people who have applied the same logic to God that they observe in shunning sinners. They are wise in the ways of the world but fail to grasp the mystery of God’s love.

The Gospel invites us to live in both this world and in the world to come. It is the zone of the Beatitudes, a place of paradox and ambiguity that requires us to discern God’s presence in every situation and to act as we believe God would act, even to err on the side of mercy. If we surprise, even shock, others who think we are being foolish, then we stand with Jesus, who was also criticized for acting this way. Yet, in the end and in God’s time, there is a wisdom here that will bless us both now and in eternity.